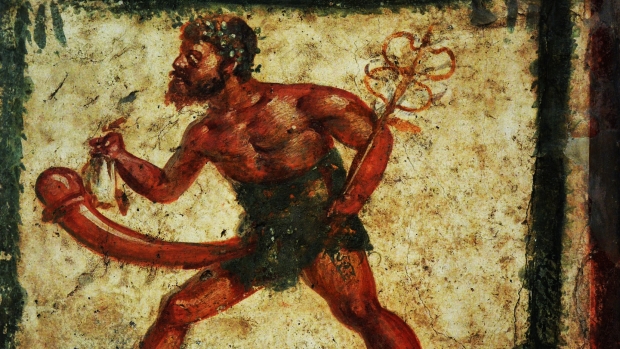 You bet that Apple is there

Every year some technology ends up causing more problems than it cures or just turns out to be total pants. We usually consider Apple the front runner for providing over-priced technology that no one ever needs or just messing up something simple. However this year it had a competition which was so stiff it would have made Priapus (pictured) proud or rather prouder.

Everyone, other than the Tame Apple Press, wanted to see Samsung’s folding phone and it appeared that the company stuffed it up by sending it to them to review. Of course, Apple-friendly reviewers were going to do their best to ignore all the instructions and try to wreck the phone.  However, Samsung helped by making an expensive phone which was probably too flimsy to survive life in the real world, let alone an Apple fanboy.

“After one day of use,” tweeted Bloomberg gadget reviewer Mark Gurman in April along with a picture of a flickering screen. “Completely broken and unusable.”

Samsung to abruptly postpone the phone’s spring launch, saying it would “take measures” to toughen up the display. It all came down to a weak hinge as well as certain substances found within the device which was not as much fun as it sounded.

Reviewers say a re-engineered version, now on sale for $1,980, remains “fragile and experimental” and is a “science experiment” that proves flexible screens aren’t ready yet.

Fruity cargo-cult Apple has had comedy errors all year, but some of its most embarrassing was connected to its credit card.  Not only did the hard copy of the card break due to its design “features” this year revealed something fundamentally wrong with the algorithm which discriminated against women.

Steve Wozniak, Apple’s co-founder, was stunned when he got a credit limit 10 times higher than his wife even though their assets are held in common. Apple’s answer to the problem was to do nothing after all girls are icky and should not be allowed to touch money.  Well other than user’s mothers of course. Goldman Sachs who are backing the card did offer to review gender-bias claims and the US financial regulator is apparently investigating.  Our guess is that it will be years and a Supreme Court Case before Apple is forced to admit that there is something wrong.

One of the dafter “defence” ideas being touted by governments involves the Internet off-switch.  The US,  Russia and China have all been looking into ways to cut themselves off from the worldwide wibble if not permanently at least during times of war.

However, Internet kill switches have been used in Indian, Pakistan, Turkey, Iran, Sudan, and Benin as a method of population control. India shut off the internet for 60 million people in December. During the full year, it cut off connectivity more than 90 times in all. Similar shutoffs are happening in Pakistan, Turkey, Iran, Sudan, and Benin, where governments have learned that flipping the switch can cool dissent, avoid trouble, and stop news of protests from reaching the world.

The problem is that it didn’t work.  While it might have stuffed up businesses, and public institutions who have to obey the rules, the people that the government’s wanted to silence just turned to workarounds to get their internet fix.

Boeing’s 737 Max was in hot demand right until they started dropping out of the sky.  The subsequent inquiries revealed how much control Boeing had over aircraft regulators and provided good reasons never to trust the company.

At the heart of the problem was an autopilot system that took over and plunged the planes to their doom. The pilots had only a short time to react to flight control, called MCAS, that they knew little or nothing about.

The autopilot was installed to compensate for a decision to add more significant, more fuel-efficient engines which made them stall in certain situations. What was more worrying was the investigation showed that US air safety regulators had over time ceded more and more authority to Boeing letting the company do what it liked.

Boeing’s losses are already in the billions, and the 737 Max fleet remains grounded.

Last modified on 27 December 2019
Rate this item
(0 votes)
Tagged under
More in this category: « Italians give Huawei a pizza of the 5G action Sorry Steve, Open Source beat you »
back to top