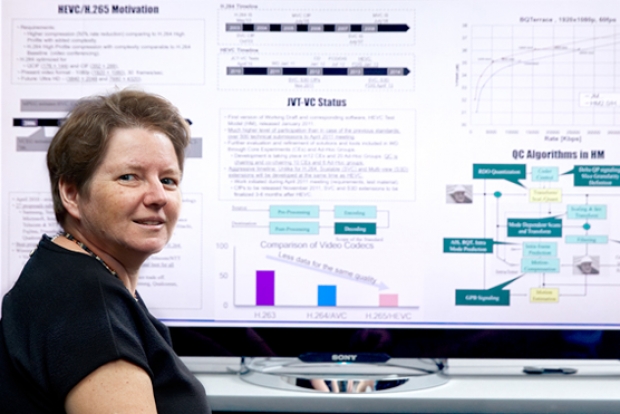 Dr. Marta Karczewicz was recognized for contributions to video streaming standards making it to a final three over 400 nominees.

As a vice president of technology at Qualcomm Technologies she is a pioneer in the field of video compression, holding some 400 patents worldwide.

Her work focuses on video codecs, which are foundational building blocks that allow large volumes of raw video data to be compressed and streamed across cellular networks. Her inventions have been instrumental in a variety of video compression standards like AVC and HEVC. So next time you play a video file on your phone or any other device, there might be a significant chance that some of the Marta patents will help you video running smooth. Karczewicz developed key components of Advanced Video Coding (AVC), the most commonly used video codec on the market for the recording, compression and distribution of video content worldwide.

“It’s not an exaggeration to say that the video streaming we enjoy every day wouldn’t be possible without Dr. Karczewicz’s inventions,” said Dr. Jim Thompson, executive vice president, engineering and chief technology officer, Qualcomm Technologies, Inc. “Her nomination for this prestigious award is yet another validation of the fundamental value of what Qualcomm invents, and the world-class caliber of its inventors.”

The European Inventor Award recognizes the contributions of outstanding European inventors who have made real contributions to technological progress and have improved people’s daily lives through their inventions. The highly prestigious Lifetime Achievement category honors a single inventor whose long-term contributions and patented landmark inventions have had a major impact on his/her field of technology and society at large.

Dr. Karczewicz is one of three finalists for the award out of over 400 initial nominees.

The award ceremony will take place on June 20th, 2019 in Vienna, Austria.

Last modified on 07 May 2019
Rate this item
(0 votes)
Tagged under
More in this category: « Vodafone wants German government to invest in pipes Adobe subscription means price hikes »
back to top