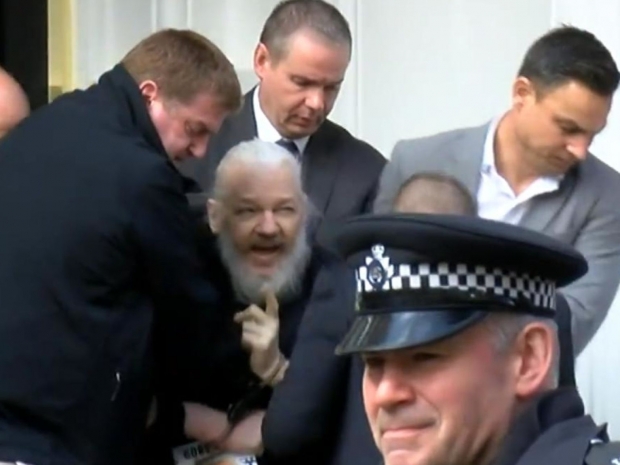 British bobbies have arrested bail-jumper Julian Assange after he was kicked out of the Ecuadorean Embassy in London, where he has lived for almost seven years.

The Metropolitan Police said in a statement that Assange had been arrested by officers at the embassy on a warrant issued by Westminster Magistrates’ Court in 2012, for failing to surrender to the court. He faces a charge in a British court of jumping bail.

Assange is suspected of aiding Russian interference in the 2016 presidential election by releasing material stolen from the computers of the Clinton campaign and the Democratic Party. In July, the Justice Department charged 12 Russian intelligence officers with hacking those computers, and the indictment contends that at least one of them was in contact with WikiLeaks.

Assange took refuge in the embassy in June 2012 to avoid extradition to Sweden to face questions about sexual assault allegations. He has insisted that the accusations against him are false and has said that the Swedish authorities intend to extradite him to the United States. They didn’t know of course and while Sweden has rescinded its arrest warrant for Assange, but prosecutors have stressed that the case was not closed and could resume.

Ecuador gave Assange asylum in 2012, believing that he was poster child for the left and was likely to hack off the US. However, Assange proved to be a pain in the arse and interested in peddling a right-wing agenda. Much of his WikiLeaks organisation has changed hands since he hid in the embassy. President Lenín Moreno, who took office in 2017 had looked for a face saving way to get him out of the arrangement.

Paul Manafort, the former Trump campaign manager who has since been convicted of financial crimes, reportedly offered in 2017 to help Ecuador hand Assange over to American authorities, but the deal was never struck.

In December 2017, Ecuador gave Assange citizenship and was preparing to appoint him to a diplomatic post in Russia, but the British government made clear that if he left the embassy, he would not have diplomatic immunity.

The Ecuadorean government said in March last year that it had cut off Mr Assange’s internet access, saying that he had violated an agreement to stop commenting on, or trying to influence, the politics of other countries. The government also imposed other restrictions on him, limiting his visitors and requiring him to clean his bathroom and look after his cat.

He sued the Ecuadorean government in October, claiming that it was violating his rights.

During the 2016 campaign, WikiLeaks released thousands of emails stolen from the computer systems of the Democratic National Committee, leading to a series of revelations that embarrassed the party and Hillary Clinton’s campaign. United States investigators have said that Russian agents hacked the systems.

Assange made no secret of his intent to damage Clinton, but he has insisted that he did not get the emails from Russia.

Meanwhile, Wikileaks has been trying to get ahead of the news agenda. WikiLeaks says Assange was the subject of a sophisticated spying operation in London's Ecuadorian embassy.

WikiLeaks said video, audio, photographs, copies of private legal documents and even a medical report turned up in Spain, where a group threatened to start publishing unless they were paid three million euro ($3.38 million).

Kristinn Hrafnsson, WikiLeaks editor-in-chief, said he met members of the group who were selling the material and that Spanish police are now investigating the case.

"Extortion is a very serious matter but of much greater concern to me is this material-gathering and spying on Julian Assange by the Ecuadorian government", Hrafnsson told reporters.

Last modified on 11 April 2019
Rate this item
(0 votes)
Tagged under
More in this category: « More than half of US doesn’t have broadband ASML plays down corporate theft »
back to top