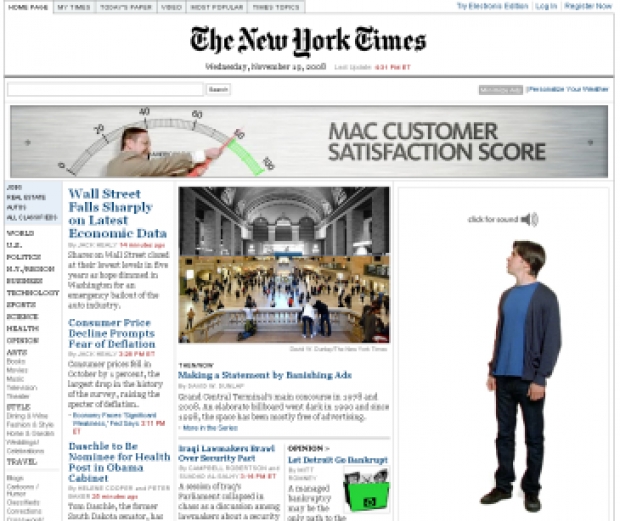 For years the New York Times has bolstered the fruity cargo cult Apple by providing it with free advertising. But now that appears to be coming to an end.

Apple is expected to launch a new entertainment and paid digital news service next week but it looks like its number one fanboy will not be involved.

New York Times chief executive Mark Thompson attacked the Apple business model and warned that relying on third-party distribution can be dangerous for publishers who risk losing control over their product.

He said:” We tend to be quite cautious about the idea of almost habituating people to find our journalism somewhere else. We’re also generically worried about our journalism being scrambled in a kind of Magimix (blender) with everyone else’s journalism.”

Thompson, who took over as New York Times CEO in 2012  has overseen a massive expansion in its online readership, but warned publishers that they might suffer the same fate as television and filmmakers in the face of Netflix’s Hollywood insurgence.

“If I were an American broadcast network, I would have thought twice about giving all of my libraries to Netflix”, Thompson said in response to questions about any talks with Apple to participate in the iPhone maker’s new news service.

Apple is the latest company to offer a direct-to-consumer streaming video, along with a news subscription service, by leveraging the power of its more than 1 billion devices.

Through its subscription news service, Apple will charge about $10 monthly for access to a variety of magazine and newspaper content, according to media reports. Apple is expected to take 50 percent of the revenue. The Wall Street Journal has agreed to join Apple’s service, according to a recent New York Times report. News Corp, an owner of the Journal, was not immediately reachable for comment.

A monthly digital subscription to the New York Times costs $15, and Thompson said he has no plans to give that up to participate on other platforms such as Apple’s.

Last modified on 22 March 2019
Rate this item
(0 votes)
Tagged under
More in this category: « US tech expanding in Canada Apple security fails James Bond »
back to top