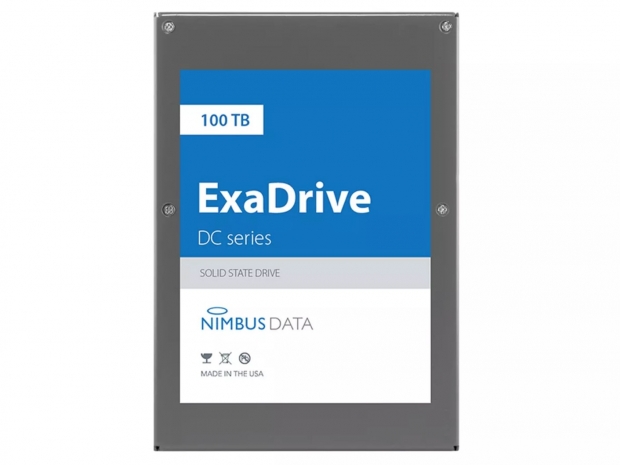 Nimbus Data has released its ExaDrive DC100 SSD which can manage 100TB – much more than Samsung's 30TB SSD and Seagate's 60TB SSD monsters.

To be fair, Samsung and Seagate's huge SSDs have not been seen in the wild so Nimbus Data and its ExaDrive DC100 is undoubtedly a record beater.

In a press release, the company said that conventional SSDs are based on a single flash controller. As flash capacity increases, this monolithic architecture does not scale, overwhelmed by error correction operations and the sheer amount of flash that must be managed. In contrast, ExaDrive is based on a distributed multiprocessor architecture. Inside an ExaDrive-powered SSD, multiple ultra-low power ASICs exclusively handle error correction, while an intelligent flash processor provides wear-levelling and capacity management in software.

Nimbus Data claims up to 100K IOPS in random read/write workloads which is rather fast for writes. Overall drive throughput is listed at 500MBps. If all this is correct you are looking at an SSD capable of sustaining 500MBps of throughput can write a gigabyte of data in two seconds.

The ExaDrive DC series includes both 100 TB and 50 TB models. The company said it is currently sampling to strategic customers and will be available in summer 2018. Nimbus Data has qualified the DC series in storage and server enclosures from major vendors.

Last modified on 21 March 2018
Rate this item
(0 votes)
Tagged under
More in this category: « Kaspersky sets up in Swiss centre IBM CEO says 80 percent of data is not searchable »
back to top