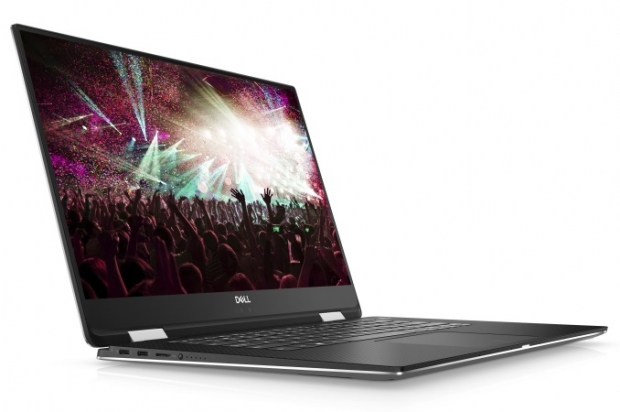 Dell is having a busy Consumer Electronics Show (CES) with a ton of new products and improvements on show.

The latest XPS 13 is improved in every conceivable way and was named the CES 2018 Innovation Award honoree. Along with its next-generation InfinityEdge 4K Ultra HD display, the XPS 13 adds a "dazzling" Rose Gold with Alpine White woven glass fibre interior as an option to traditional silver and black, with narrower borders and up to 80 percent more thermal headroom.

It has a thinner, lighter design and GORE Thermal Insulation, which reminds us is the same silica aerogels used in the Mars Rover to diffuse and dissipate heat.

Dell has also been looking to take advantage of Apple’s move away from the professional laptop market towards consumers by filling the gap.

Dell unveiled the first XPS 15 2-in-1, billed at the world's most powerful 15-inch 2-in-1. It is supposed to balance high performance with a sleek design, the smallest and thinnest 15.6-inch 2-in-1 available delivers the CPU and graphics horsepower to run content creation apps, process huge files and play AAA games while featuring touch, pen, a maglev keyboard and the screen "real estate" that creators apparently crave.

Dell claims to be the first PC maker to introduce software that enables complete wireless integration between Dell PCs and smartphones (iOS and Android). Pre-installed on all new Dell consumer PCs, Dell Mobile Connect lets people make calls, send texts, get notifications and even fully mirror their phones to interact with all their favourite mobile apps.

The Alienware Command Centre claims to merge system settings, content and other functions into a simple and elegant interface and helps "novices" to experienced gamers optimise and tune PCs and peripherals to their gaming needs. Now a gamer can access her or his game library from all sources on a PC, easily create custom profiles for each game and squeeze out more performance with power management and overclocking tools.

Also hitting the market is AlienFX 2.0, the second generation of Alienware's proprietary in-game lighting system that works across Alienware PCs, mice and keyboards. The Alienware Command Center provides more customisation of individual keys and key groups with more than 16.8 million colors in each lighting zone.

Meanwhile, Dell tells us that it is collaborating with Nvidia and Oculus to create a new category of competitive virtual reality (VR) eSports that combine physical and mental competitive gaming and brings it to the masses.

During the last two months, more than 200 participants across 14 different cities competed on Alienware systems to get the fastest time on Survios' latest VR game, "Sprint Vector". The finale will take place in Las Vegas with the top eight players battling it out for the Alienware VR Cup National Champion title and $10,000 in prizes.

Adding to the ease of one stop shopping, Dell is the first PC provider to sell the consumer version of HTC Vive VR headsets. In addition to offering the HTC Vive Business Edition, Dell is also confirming a deal with Meta to offer its immersive augmented reality (AR) headset.

Meanwhile Dell has added a couple of ultrathin monitors -- the Dell 27 Ultrathin Monitor (S2719DM) and Dell 24 Ultrathin Monitor S2419HM. With a sleek profile at only 5.5mm at its thinnest, both monitors deliver peak brightness of 600 nits, which is rather bright for head lice.

Productivity benchmark tests show dramatic performance uplift over products based on the previous generation processors. The additional cores and threads make a noticeable difference on company networks when IT is running encryption, malware scans and other background apps to secure and connect employees.

The Latitude product line also has been updated too. For example, the Latitude 7490 notebook features an exclusive active steering antenna that delivers better WiFi range, speed and connection reliability, and a new Full HD super low power display that Dell claims reduces power consumption by up to 50 percent. All this gives several hours of additional battery life.

Dell Mobile Connect will be available for download starting Jan. 1 and come pre-installed on all Dell consumer systems starting January 27

Alienware Command Center will be available starting on the new Area 51 in February.