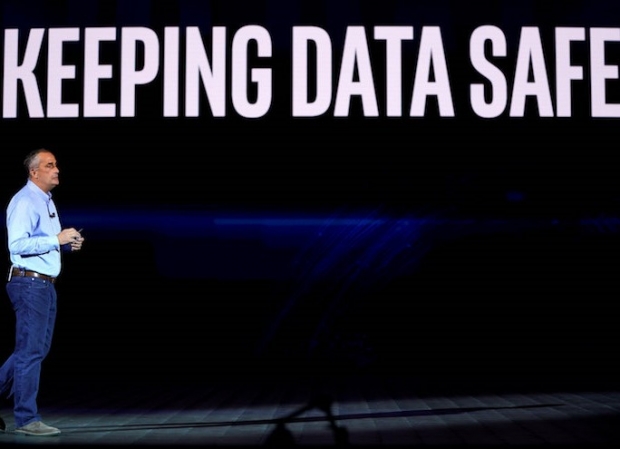 Intel CEO Brian Krzanich is not avoiding talking about the Spectre and Meltdown bugs. At his opening keynote at CES 2018 Krzanich tackled the issue from the start.

For those who came in late, Intel chips were discovered to have a security flaw, forcing companies to respond and reassure customers and tell befuddled consumers what steps they are taking to protect them.

Krzanich said that the collaboration of so many companies to the Spectre and Meltdown bugs had been “truly remarkable”. Everyone from chip makers to operating system vendors to system companies has participated in finding ways to patch the bugs and protect consumer data.

“Security is job No. 1 for Intel and our industry, and the primary focus of our decisions have been to keep our customers’ data safe,” Krzanich said.

“We have no information these exploits have been used to obtain customer data”, Krzanich said. He also said that Intel’s software patches and other vendors’ updates would patch more than 90 percent of computers within a week, and a solution for all computers could be available by the end of the month.

“When we come together like this, there are endless possibilities”, he said.

Having dealt with the elephant in the room, Krzanich went on to talk about happier news.  In autonomous driving, he unveiled Intel’s first autonomous vehicle in its 100-car test fleet; disclosed that BMW, Nissan, and Volkswagen are moving their Mobileye-based mapping design wins to actual deployments; and announced new collaborations with SAIC Motor and NavInfo to extend crowdsourced map building to China.

Looking at AI’s future, Krzanich announced a partnership with Ferrari North America to use Intel’s AI technologies to apply data from the racetrack to enhance the experience for fans and drivers.

In the immersive media area he introduced the newly established Intel Studios and announced Paramount Pictures will be the first major Hollywood studio to explore this technology in tandem with Intel to see if it all pans out.

“Data is going to introduce social and economic changes that we see perhaps once or twice in a century. We not only find data everywhere today, but it will be the creative force behind the innovations of the future. Data is going to redefine how we experience life – in our work, in our homes, how we travel, and how we enjoy sports and entertainment”, he said.

Beyond autonomous cars, Krzanich also demonstrated the Volocopter, a fully electric, vertical takeoff and landing aircraft designed for passenger transport. The Intel Flight Control Technology used in the Volocopter is based on the intelligence found in the Intel Falcon 8+ drone used for inspection, surveying and mapping, showing the powerful intersection of data and autonomous technology.

Krzanich showed how companies are using Intel’s technology to transform their businesses through AI.

He announced Intel is partnering with Ferrari North America to bring the power of AI to the Ferrari Challenge North America Series that will take place on six courses in the US this year.

The Ferrari Challenge broadcast will use the processing power of Intel Xeon Scalable processors and the neonTM framework for deep learning not only to transcode, identify objects and events, and stream the experience to viewers online, but also to mine the resulting data for further insights for drivers and fans.

He also mentioned Intel’s efforts to develop a quantum computing system. Intel shipped its first 49-qubit quantum computing test chip (“Tangle Lake”) to research partner QuTech. Quantum computing is the ultimate in parallel processing, and Krzanich noted it has the potential to compute at a far greater speed than anything ever achieved before.