Would you trust windows in your Microsoft cars? 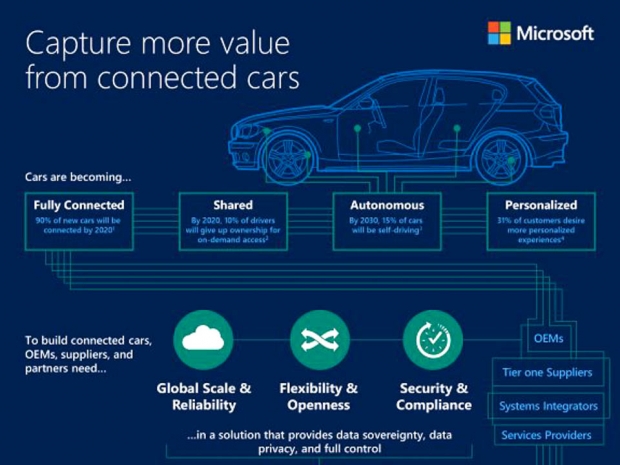 Cortana, Office365, Skype, and Azure cloud integration in the car

Microsoft said that it will begin licensing some of its intellectual property (IP) for internet-connected automobiles in an effort to usher in a new wave of real-time communications, roadside assistance, infotainment services, and self-driving features for consumers over the next few years.

The big push for connected automobiles has been in development since at least 1996, when Cadillac debuted the 1996 DeVille with OnStar cellular systems and GPS location services. Seven years later, connected car services were updated to include vehicle health reports, turn-by-turn directions and basic network features. Then in 2014, General Motors debuted the first 4G LTE connected services to a range of its automotive brands, along with Audi, and then Tesla the following year.

With extensive investments in R&D, the Redmond software giant now wants to develop customized solutions for other automotive manufacturers that seamlessly integrate the car into the digital life of their customers. The idea is to deliver a set of Internet connected experiences that are “safe, productive, and fun”. The company will introduce five key areas for its auto partners to deploy in their own lists of connected vehicle features – in-car productivity, customer engagement and insight, telematics, connected ADAP support, and advanced contextual navigation. 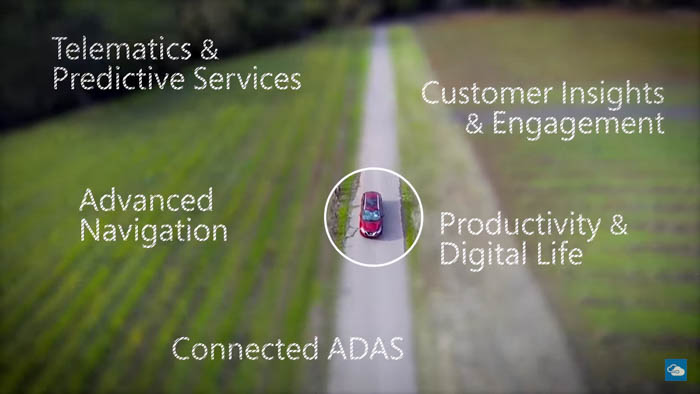 "Imagine your car alerting you to a problem,” said Doug Seven, Principal Group Program Manager of Azure at Microsoft. “It can connect to the platform through a set of service providers, and through Cortana schedule a set of meetings with you.”

Microsoft claims that its customers want a connected car that represents their individual brands, and it wants to focus on being their underlying platform provider. The company’s platform essentially runs on a series of developments in artificial intelligence, machine learning algorithms, its own Azure cloud platform to integrate with a driver’s personal Microsoft devices and services and deliver the in-car connected experience that integrates personal data with the vehicle’s dashboard environment.

Using the Cortana intelligence suite, for instance, a driver will be able to ask a Microsoft-connected vehicle to schedule a meeting to his or her calendar, email a document created with Office365, access brand-specific infotainment services using the Azure cloud platform, and dial a contact over Skype.

The company has reached an agreement to license its intellectual property to Toyota as its first partner in the launch of the new Connected Vehicle Platform. The agreement builds on the strong existing partnership between Microsoft and Toyota, which has included their collaboration on the Azure-based Toyota Big Data Center. The Japan-based facility will become part of the company’s Toyota Smart Center pilot program, which launched back in April 2011 as a plan to build a program for next-generation telematics services using the Azure cloud platform.

During CES 2016, Toyota announced that certain 2017 model year vehicles would see the installation of new Data Communication Modules (DCMs) connected to LTE. These modules would quietly analyze and process data collected from vehicle alert notifications and transmit information back to the TBDC under high-level information security and privacy controls.

The IP licensing program will eventually span to other automakers as well, and the goal is for partnering automakers to actuate their own connected transformations by developing completely customized services and app suites. “Automakers can focus on what matters most to their customers while launching the smart mobility services of the future,” says Microsoft.

Last modified on 25 March 2017
Rate this item
(0 votes)
Tagged under
More in this category: « Pre-5G networks come in late 2017 Uber suspends self-driving initiative »
back to top