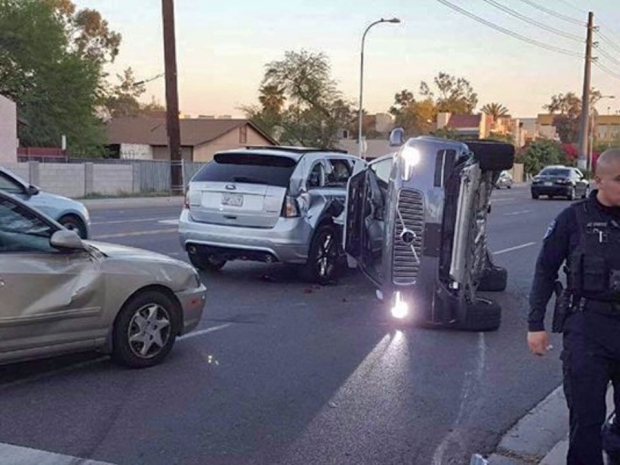 No one injured at the scene or inside the vehicle

Uber announced on Friday that it would be suspending its self-driving car program after one of its autonomous vehicles was involved in a high-impact crash in Tempe, Arizona.

According to local witnesses and law enforcement officials, the self-driving Volvo SUV collided with another car that had turned left in front of it, causing the collision. The ride-hailing company says it was not responsible for the incident and reports no injuries at the scene, though it will be suspending all autonomous tests in Arizona and pausing its self-driving fleets in Pittsburgh until it can complete investigation.

At the time of the accident, the vehicle was in self-driving mode, with two people in front of the car to monitor its performance and take over in the event of an emergency, according to the Financial Times. Based on the video that was posted to social media, the collision resulted in the self-driving car rolling onto its side.

"There was a person behind the wheel," said Josie Montenegro, Tempe police information officer, regarding the Uber vehicle. "It is uncertain at this time if they were controlling the vehicle at the time of the collision."

An Uber spokeswoman added, "we are continuing to look into this incident and can confirm we had no backseat passengers in the vehicle".

But the San Francisco-based ride hailing service has not gone completely unscathed by other competitors from its autonomous service efforts. Alphabet Inc, the parent company of Google, has a self-driving division called Waymo. That company sued Uber’s $680 million self-driving startup, called Otto, earlier this year for stealing the design of its lidar equipment – the detection system that works on principles of radar, but uses light from a laser. The “calculated theft” of Alphabet’s technology earned Otto’s employees over $500 million, according to the San Francisco federal court. Uber has called the lawsuit a “baseless attempt to slow down a competitor.”

The patent theft allegation is just one in a series of scandals Uber has faced in recent months, including allegations of gender discrimination in the workplace. In one instance, one of the company’s engineers resigned after being told that she could be fired illegally for reporting a discriminating manager to human resources.

The other concern involves the use of an undercover data collection utility to evade law enforcement authorities in areas where the ride-sharing service was banned. Last month, the New York Times reported that Uber had been using a tool called “Greyball” in markets where its services were either “outright restricted” or being resisted by law enforcement, including Boston, Paris, and Las Vegas.

At least the self-driving company was courteous enough to tell the media that no backseat passengers were injured.

Last modified on 27 March 2017
Rate this item
(0 votes)
Tagged under
More in this category: « Would you trust windows in your Microsoft cars? Apple wins in Beijing in iPhone patent case »
back to top