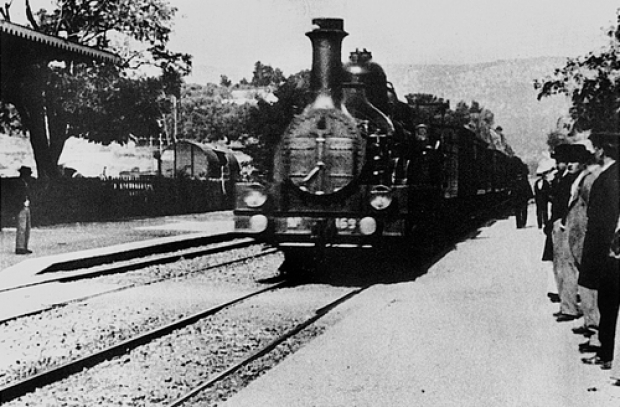 A team of boffins took time out from their busy schedule of sewing human ears onto mice to store a 1895 French film, "Arrival of a train at La Ciotat" onto a piece of DNA.

According to a new study published in the journal Science, a pair of researchers at Columbia University and the New York Genome Center (NYGC) wanted to show how an algorithm designed for streaming video on a mobile can unlock DNA's nearly full storage potential.

They showed that the technology is also extremely reliable and all you really need for a decent hard drive is to sneeze.

Yaniv Erlich and his colleague Dina Zielinski chose six files to encode, or write, into DNA: a full computer operating system, an 1895 French film, "Arrival of a train at La Ciotat," a $50 Amazon gift card, a computer virus, a Pioneer plaque and a 1948 study by information theorist Claude Shannon.

They compressed the files into a master file, and then split the data into short strings of binary code made up of ones and zeros. Using an erasure-correcting algorithm called fountain codes, they randomly packaged the strings into so-called droplets, and mapped the ones and zeros in each droplet to the four nucleotide bases in DNA: A, G, C and T.

The algorithm deleted letter combinations known to create errors, and added a barcode to each droplet to help reassemble the files later. In all, they generated a digital list of 72,000 DNA strands, each 200 bases long, and sent it in a text file to a San Francisco DNA-synthesis startup, Twist Bioscience, that specialises in turning digital data into biological data.

Two weeks later, they received a vial holding a speck of DNA molecules. To retrieve their files, they used modern sequencing technology to read the DNA strands, followed by software to translate the genetic code back into binary.

They recovered their files with zero errors, the study reports. The study also notes that "a virtually unlimited number of copies of the files could be created with their coding technique by multiplying their DNA sample through polymerase chain reaction (PCR)."

The researchers also "show that their coding strategy packs 215 petabytes of data on a single gram of DNA."

Last modified on 03 March 2017
Rate this item
(0 votes)
Tagged under
More in this category: « 94-year-old extends battery life three-fold Humans likely to revolt over robot job loses »
back to top