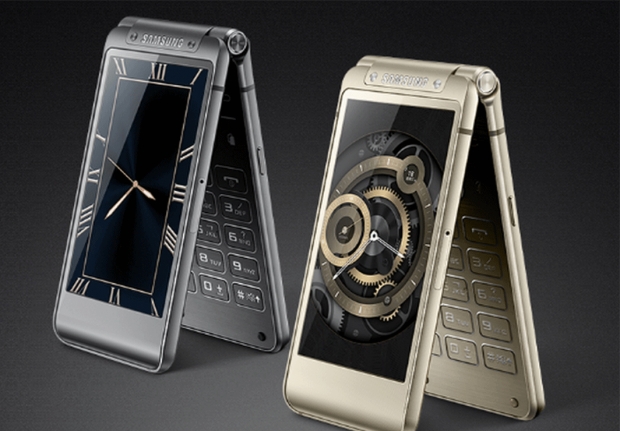 Samsung's much rumored high-end flip-phone has been unveiled behind the bamboo curtain at a rather silly price of $2,961.

Dubbed the SM-W2017 the flip smartphone is a follow-up to the previous year's SM-W2016. The main difference is that the SM-W2017 smartphone has a 4.2-inch FHD Super AMOLED display, which goes for both its main and external display.

It is powered by a Qualcomm Snapdragon 820 processor, and 4GB of RAM. It has 64GB of storage, and can be expanded via microSD card support.""

There is a 12-megapixel rear camera with a f/1.9 aperture which can shoot video in 4K quality, and a 5-megapixel front shooter for those selfie moments. Moreover, the device has support for 4G LTE, and has dual-SIM capability. Its battery power is at 2300 mAh.

There is also a fingerprint sensor, Always-On Display, fast wireless charging, and support for Samsung Pay. It is not yet known when the device will be released in China, or if it will be sold outside its initial market. Its price is not yet known, but SamMobile reports the phone could cost about $2,961.

Last modified on 04 November 2016
Rate this item
(1 Vote)
Tagged under
More in this category: « Xiaomi creates "lego" robot Why did Istanbul's Internet get the works? »
back to top