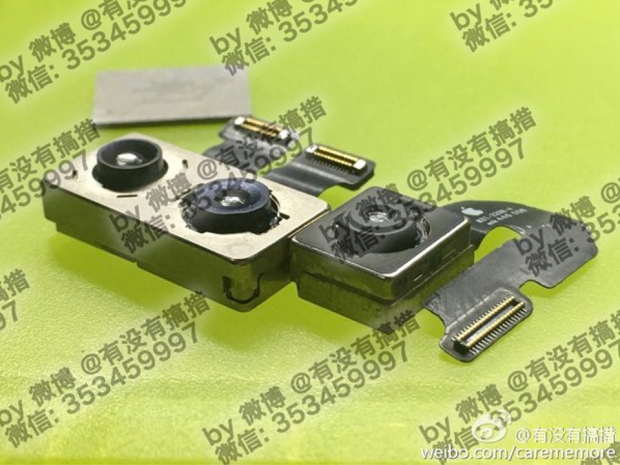 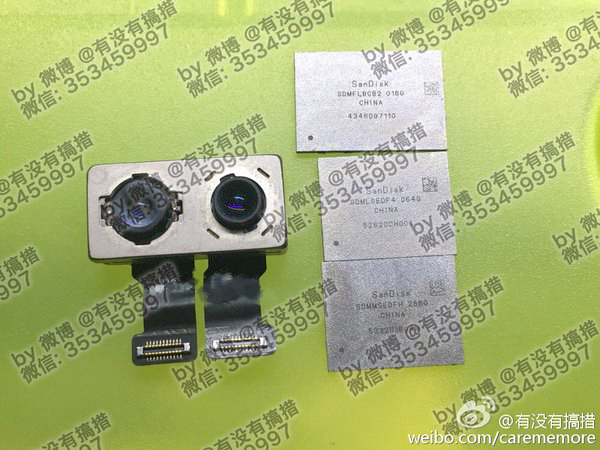 A Weibo.com user by the name carememore has revealed a few more images of internal iPhone 7 components showing a dual-sensor rear camera along with 16GB, 64GB and 256GB NAND storage modules, all manufactured in China by SanDisk.

Currently, Apple uses 16GB, 64GB and 128GB storage capacities in its iPhone 6 and iPhone 6S lineups, respectively. The images suggest that the company will be phasing out its 128GB option in favor of 256GB, yet for some reason might stick with 16GB on the lower-end model. 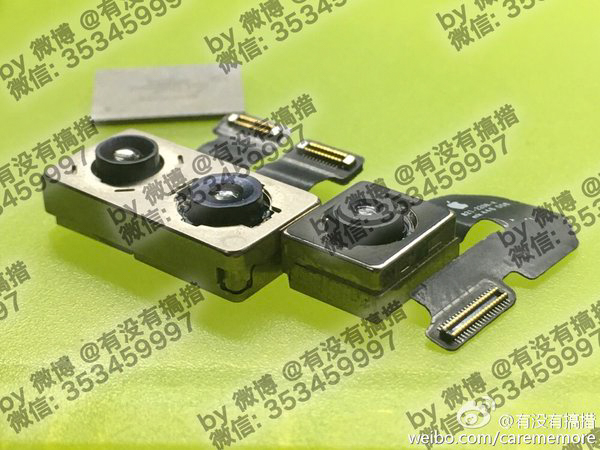 In 2016, there is absolutely no reason why any major company should offer 16GB over 32GB on the low-end option, even if the cost difference is only a few cents. Some claim this is a ridiculous example of corporate greed, considering that iOS applications can now be increased up to 4GB in size and every iPhone going forward will now include 4K recording capability just like the 16GB iPhone 6S.

On the other hand, one possibility is that the 16GB module is only pictured to highlight the growing differences in storage capacities between SanDisk’s newer and older NAND flash modules. In March, Italian site HDblog obtained an image of SanDisk’s physically smaller 256GB storage module placed next to a larger 64GB module to show process node and lithography advancements over time.

Back in January, we reported that well-connected KGI analyst Ming-Chi Kuo predicts that Apple will again launch two separate iPhone lineups in 2016, with the “Plus / Pro” option featuring a dual-lens rear camera system.

In April 2015, the company filed a patent with the U.S. Patent and Trademark Office for a “small form factor telephoto camera” that can be used with the current normal-to-wide angle camera found on all current iPhone and iPad models. The patent notes that the camera sensor will use pixels sized at 1.2 microns or less and features solutions for chromatic aberrations, along with a few other interesting technical improvements.

Interestingly, this image shows the Apple logo on the single-lens module but does not specify the manufacturer on the dual-lens module. A recent report by Nomura Securities is claiming that Sony and LG will provide the camera modules for the iPhone 7, but the camera modules themselves may have been designed by LinX imaging, a company that Apple also acquired during April 2015 two weeks before the patent was published.

Regarding shipment numbers, Nomura is suggesting Apple could sell up to 30 million units of the larger 5.5-inch “iPhone Pro” device in fiscal year 2016.

“We estimate total shipments of iPhone dual-camera module from Sony (JP) and LG Innotek (KR-TW) at 20 to 30 million units in FY2016, sufficient to cover demand from the new 5.5-inch iPhone,” said Nomura analyst Chris Chang. “Due to constraints of form factor design, we think optical zoom capability may be limited. Also, the result of Linx algorithm performance is uncertain. As such, we believe market response to the performance of iPhone dual-camera remains to be seen.”

The report also claims that Apple's upcoming 4.7-inch and 5.5-inch devices will both feature Optical Image Stabilization (OIS), while the dual-lens rear camera system will be reserved for the higher-end models.

Last modified on 24 May 2016
Rate this item
(2 votes)
Tagged under
More in this category: « AMD officially announces its Computex 2016 press event Five tech companies sit on most of the world's cash »
back to top