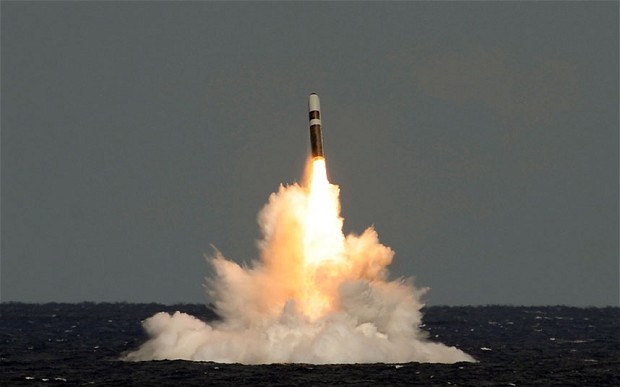 The UK government has wasted billions on a controversial nuclear weapons system which might be vulnerable to a cyber-attack.

Successive governments have paid money to the US for the system which does nothing other than be carried around in submarines waiting not to be launched against someone who might have attacked the UK in the 1960s but now can't afford it.

However there are claims that the weapons system is obsolete because it does not appear to be protected from cyber-attacks by a hostile state.

Former defence secretary Des Browne told the Guardian there could be no guarantee of a reliable deterrent without an “end-to-end” assessment of the cyber-threat to the system.

Browne highlighted a report by the defence science board of the US Department of Defence, which warned that the US and its allies “cannot be confident” that their defence systems would be able to survive an “attack from a sophisticated and well-resourced opponent using cyber weapons combined with all of their military and intelligence capabilities”.

The former defence secretary, who now serves as vice-chair of the Nuclear Threat Initiative, which campaigns for disarmament, said:

“The government ... have an obligation to assure parliament that all of the systems of the nuclear deterrent have been assessed end-to-end against cyber-attacks to understand possible weak spots and that those weak spots are protected against a high-tier cyber threat. If they are unable to do that then there is no guarantee that we will have a reliable deterrent or the prime minister will be able to use this system when he needs to reach for it.”

The UK government is asking parliament to approve the successor to the Trident programme in a “maingate decision”, which was scheduled for next year.

Ken Livingstone, the co-convenor of Labour’s defence review, said that Browne’s remarks and the US report shows that the prime minister should abandon plans to replace Trident unless Cameron can offer assurances that the system is protected from cyber-attacks.

Last modified on 24 November 2015
Rate this item
(3 votes)
Tagged under
More in this category: « Windows 10 will be the biggest OS ever Couple ran malware service arrested »
back to top