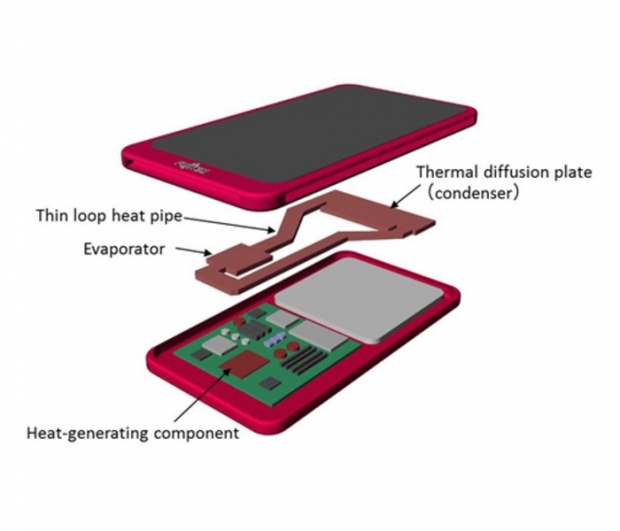 Fujitsu has developed a way of keeping mobile gear cool.

Its boffins have come up with a 1mm thick heat pipe that can spread heat around mobile devices, reducing extremes of temperature. The device can transfer about 20W, about five times more heat than current thin heat pipes or thermal materials, the company said.

The technology could improve smartphones' performance by helping cool their CPUs and other heat-producing components, spreading that heat more evenly across other parts of the phone.

Overheating has been an issue with some Samsung Galaxy smartphones, and the Korean manufacturer apparently dropped Qualcomm's Snapdragon 810 processor from the Galaxy S6 due to excessive heat concerns.

Heat pipes are common in laptops, but smartphones have sheets of metal or graphite have been used instead. Fujitsu said its pipe is the first of its kind under 1 mm thick that can be used in thin electronic devices.

The pipe consists of a stack of 0.1mm-thick copper sheets containing channels through which water circulates by capillary action, meaning it will work regardless of a smartphone's orientation. One part of the heat pipe sits over a heat source such as a CPU, which evaporates the water. Another part, a thermal diffusion plate, acts as a condenser, turning the vapour back into liquid and returning it to the evaporator part.

Rate this item
(3 votes)
Tagged under
More in this category: « HGST shows off 10TB hard drive Fundholders slammed for Apple dependence »
back to top