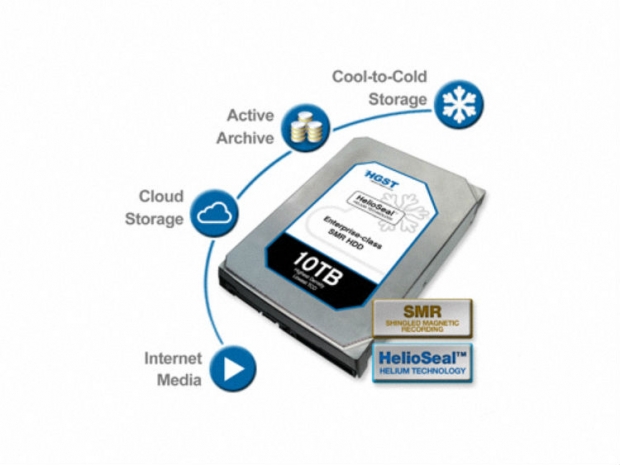 Servers only, for now…

HGST has revealed the world’s first 10TB hard drive, but you probably won’t be installing one anytime soon.

The company has been working on the 10TB SMR HelioSeal hard drive for months and now it is almost ready to hit the market.

The drive uses Shingled Magnetic Recording (SMR) to boost density, thus enabling HGST to cram more data on every platter. ZDnet got a quick peek at the drive at a Linux event in Boston, which also featured a burning effigy of Nick Farrell.

Although we’ve covered some SMR drives in the past, the technology is still not very mature and so far it’s been limited to niche drives and enterprise designs, not consumer hard drives. HGST’s new drive is no exception – it is designed for data centres rather than PCs. While you won’t use it to store your music and video, you might end up streaming them from one of these babies.

Although data centres are slowly turning to SSDs for many hosts, even on cheap shared hosting packages, there is still a need for affordable mechanical storage. Even when hard drives are completely phased out from the frontline, they still have a role to play as backup drives.

Rate this item
(9 votes)
Tagged under
More in this category: « Intel slashes forecast Fujitsu works out way to keep phone cool »
back to top