iPhone 4 silent recall may already be in effect

Week 27 units may have new nonconductive coating on metal band

The controversy over the iPhone 4's antenna design continues to grow even further this week, particularly after a ConsumerReports blog posted on Monday had engineers confirm that there is an issue with signal attenuation when the device is held in a certain way. For three weeks now, consumers of Apple's latest smartphone device have been clamoring nonstop about the issue, some even going to far as filing putative class action lawsuits against the company, alleging the company had known about the iPhone 4's manufacturing defects before it was released to market.

A few hours ago, Gizmodo began an interesting live update report in the form of testimonies from several of its readers who claim to have exchanged their defective units for new ones with completely working antennas. While it remains unclear what the real-world effects of iPhone 4 signal attenuation may actually present for complaining customers in their respective geographic regions, there is still a large portion of launch-day iPhone 4 purchasers who do not experience dropped calls, data slow downs or other antenna-related issues. 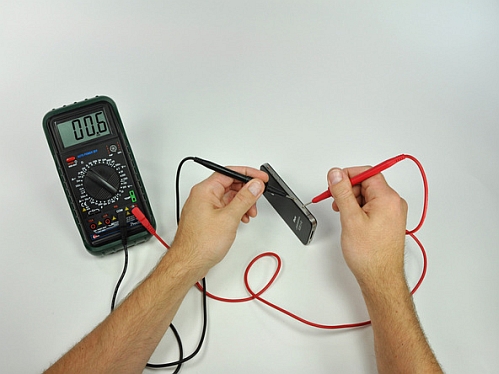 Engadget's Joshua Topolsky, for instance, is among one of the millions of unaffected users. In his testimony, he claims that his iPhone 4 review unit that was given to him a week prior to launch (a "week zero" unit) does not suffer from the growing PR nightmare that the majority have relentlessly complained about:

Joshua Topolsky - Engadget (Brooklyn, New York): "Having reviewed the phone before the general launch, I've been on high alert about the issues being reported from the start. While there are clearly problems with other people's devices, I can't seem to replicate the experience with the phone I have. I've been using the phone for about a month now without any notable reception or data rate issues -- no matter where I hold the device. In testing for our review, I found the reception to be as good if not better than [the iPhone 3GS], and I had far fewer dropped calls. That hasn't changed in the weeks since the review was posted, and though I can get the signal to show attenuation in Erica Sadun's app if I really squeeze the phone in the left corner, I cannot get it to drop a call or show a notable impact on data up- or downstream. At this point, I cannot even remember the last time I had a dropped call."

In contrast, a report from Gizmodo reader Jason Mohr gives an account of a user who has completely mitigated the attenuation issue after having received an exchange iPhone 4 unit on July 10th:

"I had the problem with my iPhone 4 experiencing the "Death Grip". I took it back to the store and complained about "slow data speeds" as I knew the "death grip" wasn't a "valid" enough reason for them to exchange the phone. My first phone no matter, how great the signal was, the "Death Grip" was in full effect as I could make the phone go to "searching" with in a few seconds. This new unit (mind you has ZERO cosmetic differences) is perfect. The "Death Grip" is totally fixed an fluctuates no more than 1 bar in a bad signal area. Something is definitely different with this phone as IT WORKS!

At home we have a tower that is literally about 600 feet away from my house. The first phone I could death grip it and make it go all the way to searching within 20 seconds. This new one goes from 5 full bars to 4 bars then after a few seconds will kick back to 5 bars. That is without the bumper just raw phone in hand. I am in Arizona."

"I have replaced my phone because of freezing issues yesterday and my new iPhone 4 is by far less sensitive than the previous one with respect to antenna issues. I made extensive signal tests with and without the death grip and can not see any different 3G signal (inside a metal construction hangar) in Santa Paula, CA. Please see one screen shot representing an average of upload/download speed. I did about 20 measurements within 10 minutes. The speed span was between 0.6 Mbps and 2.1 Mbps. I could not see a meaningful difference between applying the death grip and without."

Dr. Sommerauer ultimately confirms that he cannot longer reproduce the low data throughput phenomenon on AT&T's network when he casually grips the phone in the affected lower-left region. This has been an incredibly irritating issue for ourselves and we are well aware that our launch-day iPhone 4 32GB unit significantly lowers 3G HSPA data throughput on AT&T's network when casually gripped in our left hand, even with our palm gently surfacing the affected region of the device. We have literally ran a total of over seven hundred data throughput tests all around the Los Angeles / Orange County region of Southern California over the past three weeks using the FCC Mobile Broadband Test app, and we have witnessed a noticeable, often dramatic signal attenuation effect when any part of our hand is bridging the gap between the iPhone 4's dual antennas.

On another note, some users on the MacRumors forum have recently started a thread claiming that their replacement iPhone 4 units have new serial numbers than the units that Apple had originally shipped. In addition, iFixit.com has recently confirmed that Apple has changed the manufacturing process since the initial production run. They have also conveniently posted a helpful a guide for decoding the iPhone 4 serial number format. 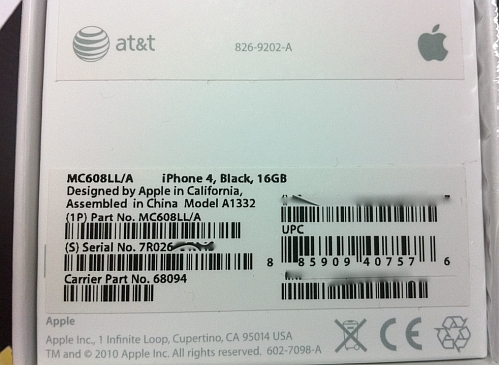 Every iPhone 4 has an 11-digit serial number on the back of each box, where digits 1 + 2 denote Factory and Machine ID, digit 3 denotes Manufacturing Year, digits 4 + 5 represent Production Week, digits 6 + 7 + 8 denote Unique Identifier, digits 9 + 10 denote Color, and digit 11 denotes Storage Size. Our iPhone 4 32GB unit was purchased from the Apple Store at South Coast Plaza, Orange County, California on launch-day and begins with the digits 87023. This signifies that our unit was produced at Factory/Machine 87 in 2010 during Week 23 of the year (June 1st - June 5th). It seems that iFixit is claiming it has received a replacement iPhone 4 32GB unit that was manufactured during Week 27 (July 5th - July 9th). The site also suggests that Apple may have added a nonconductive coating to the metal band on the sides of the phone.

Whatever the situation may be regarding these newly manufactured units, any proof of a guaranteed antenna fix still seems unclear at this point. We are looking forward to hearing real answers from real corporate figures this Friday when Apple holds its iPhone 4 press conference at 10am PST at its headquarters in Cupertino, California.