Google has announced that it will be holding an Ara conference in January and a company called Phoneblock might have something cool to show.

The company has release a video showing a Spiral 1 prototype of Ara block phone that boots to Android. The prototype is bulky and 50 percent of the phone is taken up for modularity. However this was a first step and the bezel above the screen is rather large. The phone is not thin either, and has many connectors for dozen user upgradable modules.

The Spiral 1 prototype has 10 connectors and module slots. You plug in an LED module, battery, application processor, loudspeakers at the front and a USB charge ports and it seems that these modules need all 10 connectors.

There isn't any network or Wifi on the device, so no phone module was present, or it simply didn’t work. This is an early stage prototype and the fact that the Android user experience was rather laggy is something we should forgive them. There is a Texas instrument logo and 6030b1a4 marking or OMAP 4 generation chip that powers the first generation Spiral 1 prototype.

Spiral 2 should be ready for showcase in January and with Toshiba custom chips inside and most of the area should be available for developer's functions. We don’t know what these functions are but Google will probably share this at the developers conference that takes place on January 14th in USA and Europe.

Project Ara is one interesting concept but it will not be easy to sell many Ara based phones to the retail market. Maybe Ara can start a new homebrew community such as one that formed around Raspberry Pi but this remains to be seen. Modules have to be affordable for Ara to be successful. 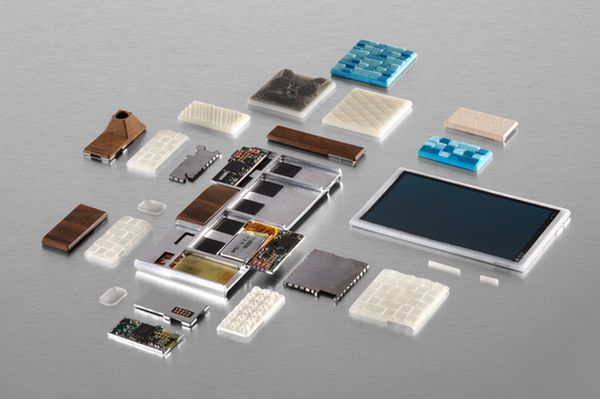 More in this category: « Samsung announces Galaxy A5 and Galaxy A3 smartphones Virgin promises WiFi to 150 London Underground Tube Stations »
back to top