Aimed at the business market


The fact that Lenovo will do a Windows 8, Intel powered tablet is not breaking news as the company has already made that clear back during Computex in June, but now The Verge managed to get some more details and it appears that, Thinkpad Tablet 2, as Lenovo decided to call it, is aimed at the business rather than consumer part of the market.

According to the report, the Lenovo Thinkpad Tablet 2 features 10.1-inch 1280x768 display and is powered by Intel's Clover Trail dual-core chip. The rest of the specs include 2GB of memory, 64GB of storage space, optional support for pen input, NFC and fingerprint reader.

As noted, Lenovo is going to market the Tablet 2 as a business oriented tablet that will compete with iPad and similar tablets on that part of the market rather than appealing to the "consumer market". The tablet will also be available with optional Thinkpad dock that will certainly appeal to those that enjoyed Thinkpad notebooks.

The price or the actual availability date have not been revealed but considering that Tablet 2 has already showed its face at the FCC, it is expected to show up alongside Windows 8 on the 26th of October.

You can check out more info over at TheVerge.com. 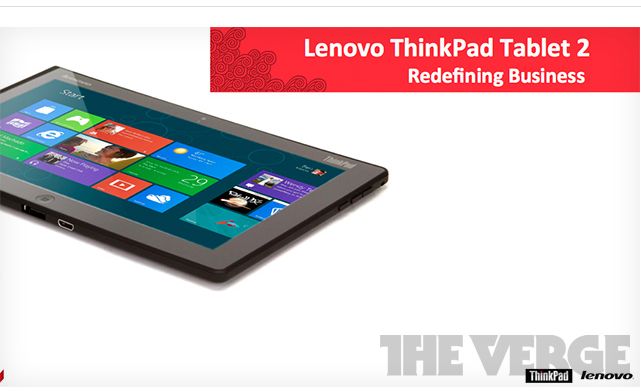 Last modified on 02 August 2012
Rate this item
(0 votes)
Tagged under
More in this category: « Archos releases first picture of G10 XS tablet RIM to release Playbook »
back to top