Xperia S put to the test, NFC and HD screen in tow


We didn’t have that much time to test the Xperia S, a pretty promising flagship handset from Sony, but we spent the better part of a day with it. It was still plenty to leave us under the impression that Sony is getting back in shape and it is bringing along some heavy artillery.

How heavy? Well, the Sony Xperia S packs a 12MP camera, NFC and Android 2.3, with an ICS update scheduled for Q2. Let’s not forget 32GB of embedded MMC storage, hi-res screen and plenty of processing power. Those are probably the most important features we can underscore. 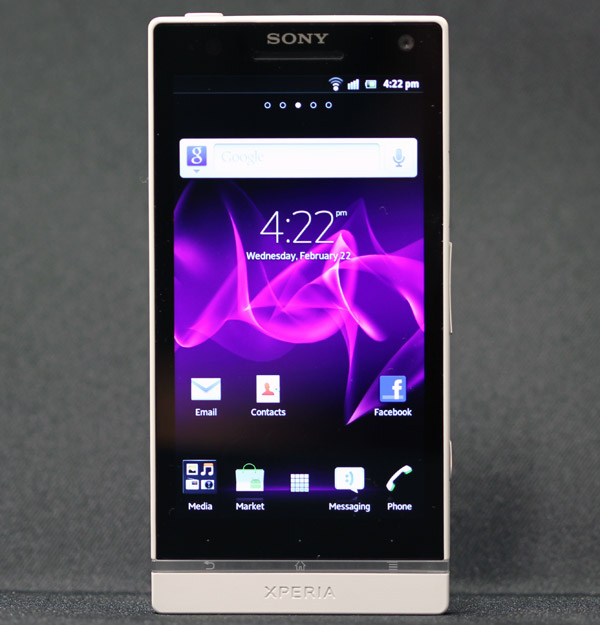 It measures 128x64x10.6mm and weighs a not so light 144g. We cannot tell you much about battery life, since we did not have enough time to properly test it. Since this is a Sony phone its DLNA certified and your latest generation TV will easily talk with it.

The first thing that you notice when you try out the Xperia S is the very high build quality, and good materials. It is definitely not a fingerprint magnet but, of course, we don’t know how the white surface will cope with grease and grit in the long run. The build is robust, the phones feels good and solid in the hand, but opening the USB 2.0 flap that covers the port was a bit awkward, clearly a triumph of style over functionality. The same goes for the lid that covers the HDMI from the other side as you don’t want to put too much force and rip it off.

The power button and headphones connector are on the top, the right hand side has USB port covered with a flap, and the whole design is pretty sleek and uncluttered. The left hand side is a bit more cramped, as it has a camera shutter at the bottom, volume rocker and HDMI.

The bottom of the phone is basically ready for a strap and doesn’t have any other major function. Also, it does not have an ugly hump on the back like many Android phones today, so it looks a tad more elegant than many high-end phones out there.

The front of the phone is naturally dominated by a gorgeous 4.3-inch display and three LED keys for back, home or settings. They are placed at the bottom just above the Xperia logo. They are cased in a semitransparent and good looking glass layer, but we cannot shake off the feeling that this phone could ended up some half a centimeter shorter if they got rid of the bottom part of the phone. Of course, it is worth noting that future Android phones will lack any keys, since they will be integrated in the screen. There might be some catch as you cannot see any wires going from the upper part of the phone to lower. You can see the 12MP camera and a LED at the back side, together with Sony Ericsson logo down below, now to be known as Sony phone logo. 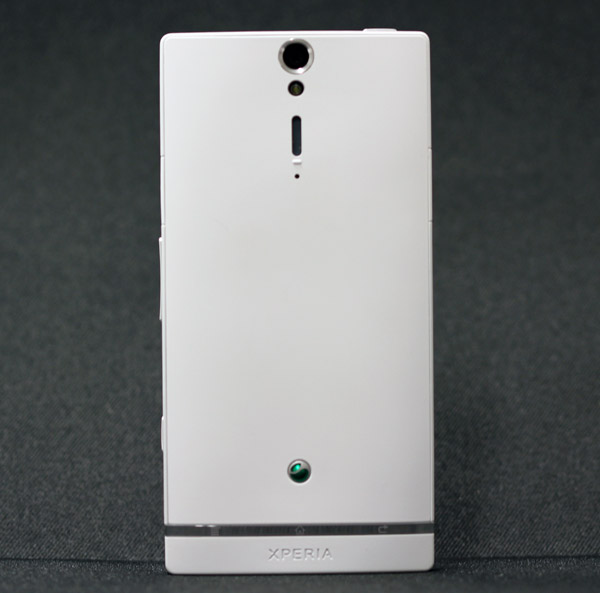 In terms of dimensions, the phone is almost identically long and wide as Samsung Galaxy S2, but it is definitely both thicker and heavier. The Sony Xperia S still feels quite good in hand and high build quality clearly results in a few extra grams.

The display is gorgeous. Colors are vivid and we have no color rendition issues to report. We would not expect anything less from Sony. We would like to see it toe to toe with the 4.7-inch Galaxy Nexus that shares the same 1280x720 resolution, but sadly we did not have a chance to directly compare them.

One of the first things we did was checking the software version and we found that it is a well-known Android 2.3.7. Ice Cream Sandwich Android 4.0 is on the way and Sony claims the update will roll out in Q2 2012. Sony’s custom Android interface was nice and it was quite fast on 45nm Qualcomm’s 1.5GHz dual-core Scorpion with single channel memory interface. Adreno 220 graphics were more than capable of handling the graphics. 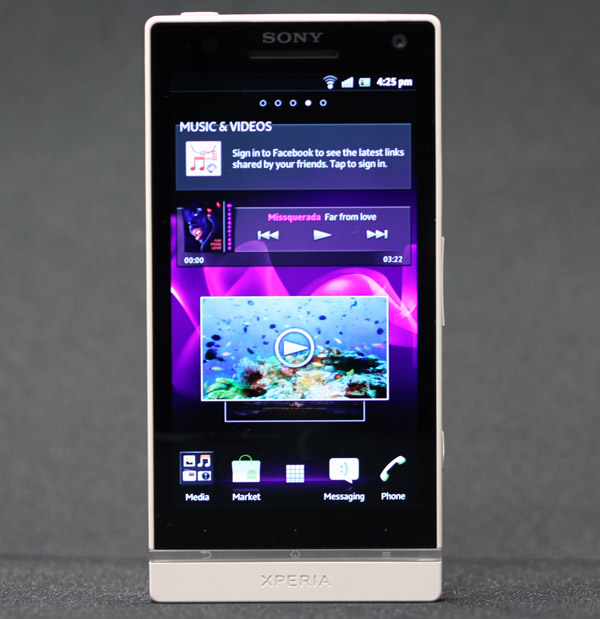 Sony has a lot of its unique widgets, like the weather one that we found preinstalled on the phone. With every phone update it will also seek and update its applications. It’s good to know that it doesn’t come with a lot of bloatware and overall we find Sony’s tweaks were pretty successful. 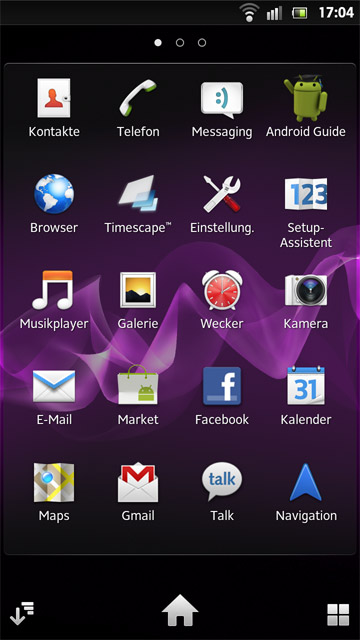 Naturally the phone integrates well with Twitter and Facebook. It also has nice applications for music and video, so playing full HD video was not a problem. There are also some other applications including some office tools and power saving app, but we didn’t toy with them that much. We will leave this to you guys. NFC is on board, but we didn’t and could not test it this time. 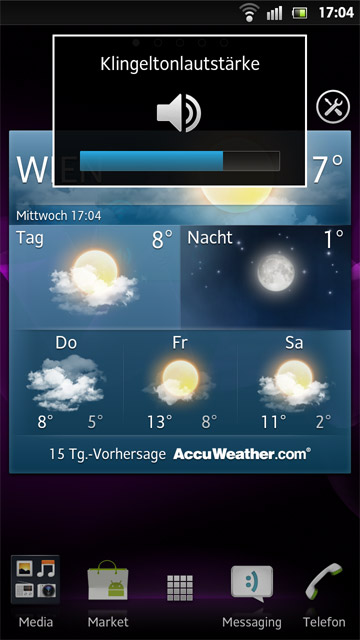 We spent some time with the camera and wanted to play around with the zero lag shutter. The phone can take picture within one or two seconds of being locked. All you need is to press and hold shutter key and it will focus and shoot instantly. This works quite fine, but some of the pictures we took using this method were slightly off focus. Bear in mind that this is probably a software glitch that will be worked out. Some photos were really nice, the colors were spot on, courtesy of the Bravia engine. It is also worth noting that a dedicated shutter button is missing on quite a few phones these days, but Sony’s decision to retain it was more than justified. 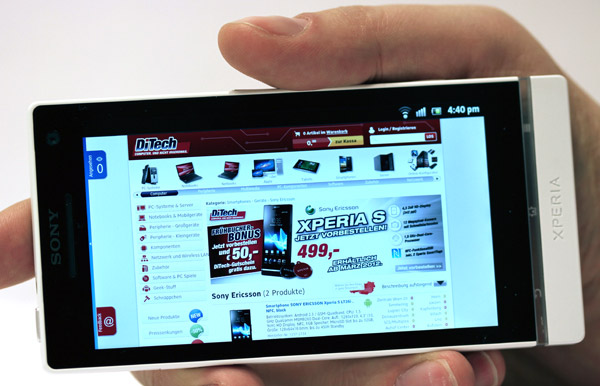 What would we do without a browser on a smartphone? This is almost the most important feature nowadays, so we went for a ride with Xperia S. We can report that it felt like the fastest browsing phone we ever laid our hands on, probably very close to the Galaxy Nexus, powered by a 1.2GHz dual-core 4460 OMAP 4 chip. As we said in our Galaxy Nexus review, browsing on a 1280x720 screen is a very pleasant experience and this is where next generation screens really start to make sense.

People who spend a lot of time on Facebook, internet and email will love the new Xperia. The phone feels really fast, but sadly we didn’t run any benchmarks at this time, so you will have to take our word for it.


Overall the Xperia S is truly a great phone. It does not feature a 28nm processor, but it is still lightning fast. We love the design, top notch build quality and it simply feels like a very nice package indeed.

It will go on sale in the first week of March for €499. If you buy it today at Ditech, the kind company that supplied this sample, you can get €50 of store credit which sounds like a sweet deal. Both black and white versions are listed here.

Although €499 is hardly a bargain in this economy, the Xperia S stacks up quite well against the competition. It costs the same as the Nexus, yet it has twice the storage and a vastly superior camera. If you think a 4.7-inch screen is too big for a phone, the Xperia S is a very good alternative and it is definitely worth a look. Samsung’s Galaxy S III is still months away, while HTC’s Velocity costs more, yet has 16GB of storage and a 960x540 screen.

There are no issues to report, aside from the somewhat awkward USB connector. The spec sheet has it all. A high resolution screen with Bravia, plenty of storage, fast processor, 12MP camera, DLNA, Playstation certification and NFC are on board. Basically, nothing is missing.

It is nice to see Sony back at the top of its game.