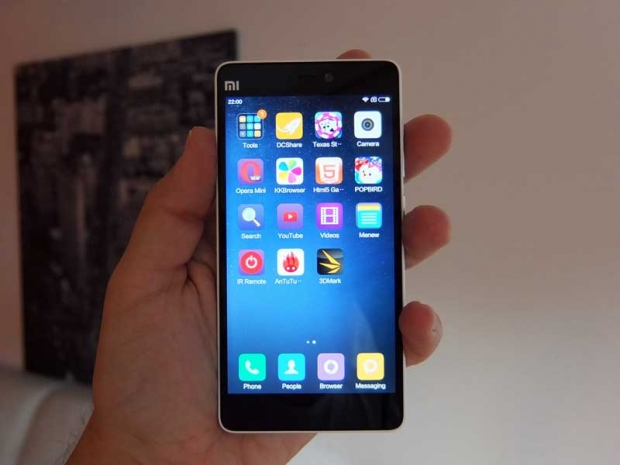 This is where the Mi4c shines. Unlike its ill-fated predecessor, the Mi4c rocks the new Qualcomm Snapdragon 808, which is a six-core processor with a very nice spec. The new Nexus 5X and LG’s G4 use the exact same chip, although they cost quite a bit more.

The differences don’t end there, as the 810 supports faster, DDR4 memory, and has a more capable camera ISP. Using dual-channel DDR4 obviously does wonders for GPU performance on the SD810, but in a mid-range device equipped with DDR3 memory, the performance gap probably wouldn’t be nearly as wide (unfortunately we don’t have any Snapdragon 810 devices with DDR3 to prove this assumption).

Both SoCs share the same LTE modem, so let’s take a look at the rest of the spec.

We also need to point out that Xiaomi is apparently sourcing components from a number of leading vendors, so we can’t be sure what sort of display and camera sensor we are looking at – in its promotional materials, Xiaomi talked about “custom displays” with ultra-narrow bezels. It appears the panel is manufactured by Sharp/JDI, but we are not sure. 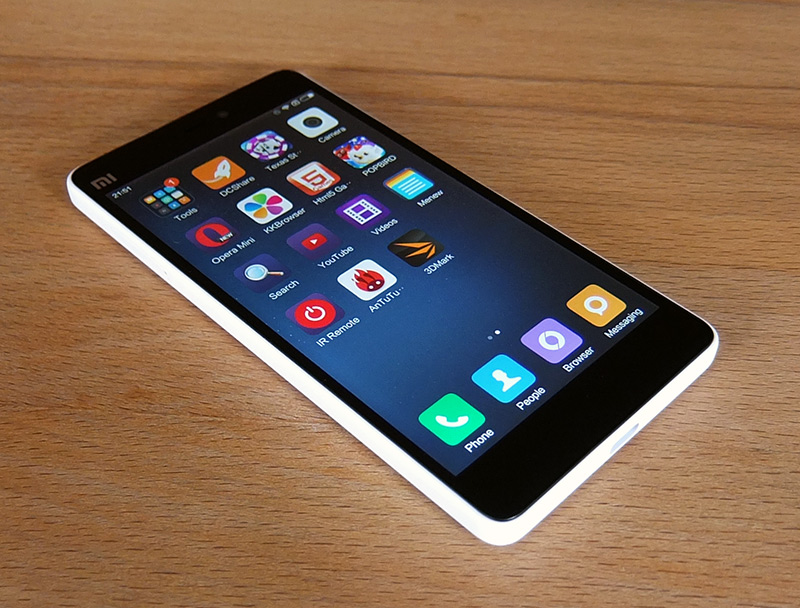 As far as the camera sensor goes, it turns out you could end up with Sony’s IMX258 or the Samsung S5K3M2. Regardless of vendor, the sensor is quite good and features PDAF.

As you would expect, the Snapdragon 808 blows most mid-range phones out of the water. In AnTuTu you’re looking at 50k+, single thread performance is much higher than on Cortex-A53 octa-cores, and the GPU is a lot faster than anything you’d find in mainstream octa-core chips from Qualcomm, MediaTek or Huawei.

It’s not just the SoC, the rest of the package is just as good. Although 16GB of storage won’t impress anyone in this day and age, we are looking at a fast eMMC 5.0 unit. Speedy storage improves user experience. The only pity is that Xiaomi decided against a microSD slot, as it would have made the Mi4c even more attractive (16GB of eMMC 5.0 is plenty for most people, but 32GB of more microSD storage would have been a boon for users who have a big media collection).

The responsiveness is top notch and the phone feels well optimised. Compared to the Snapdragon 615, which was used in the Xiaomi Mi4c, the 808 is in a league of its own.

It doesn’t stutter or slow down, but it’s not perfect. The Snapdragon 810 has a reputation for throttling, while the 808 does not, at least not yet. Our sample experienced quite a bit of throttling after we ran a few consecutive benchmarks. Mind you, this is not a realistic use case, but due to the 810’s reputation, we felt compelled to push the Snapdragon 808 to its limits. 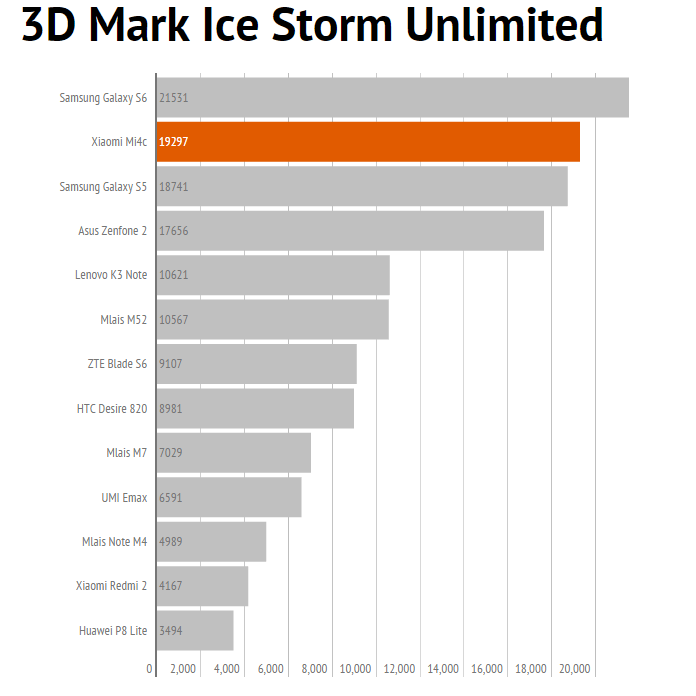 With a cold phone, we maxed out 3D Mark Ice Storm Extreme, but once it throttled, we ended up with just 6,500 points. Since we maxed out the Extreme test, we tried out Ice Storm Unlimited and ended up with an impressive score of about 19,500 on a cold device. That’s faster than an LG G4, or an iPhone 6, and it’s just 10-15% less than what you’d get on a Samsung Galaxy S6.

However, sustained performance paints a different picture. After a few minutes of high intensity gaming (or benchmarking), the Snapdragon 808 will throttle and you’ll be lucky to get 15,000. 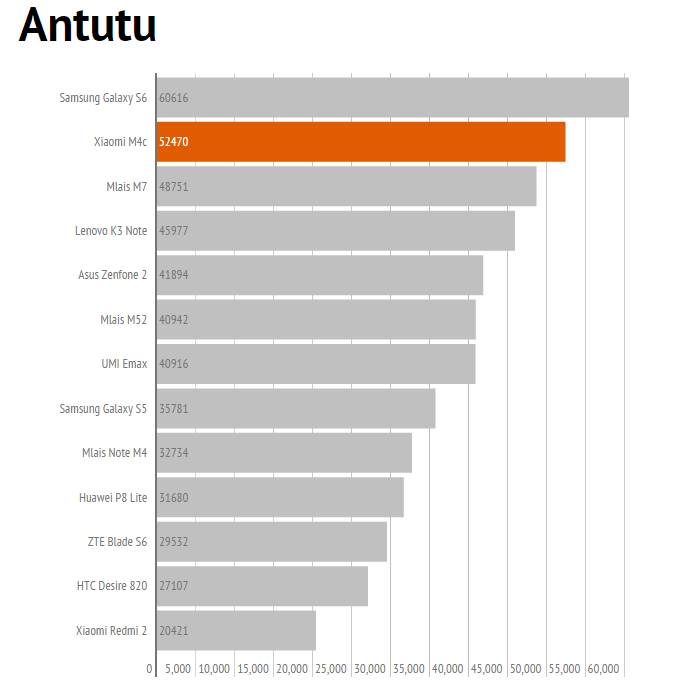 All smartphones with high-end processors throttle, including devices based on Qualcomm’s latest A57 SoCs, so we can’t hold it against this particular product. 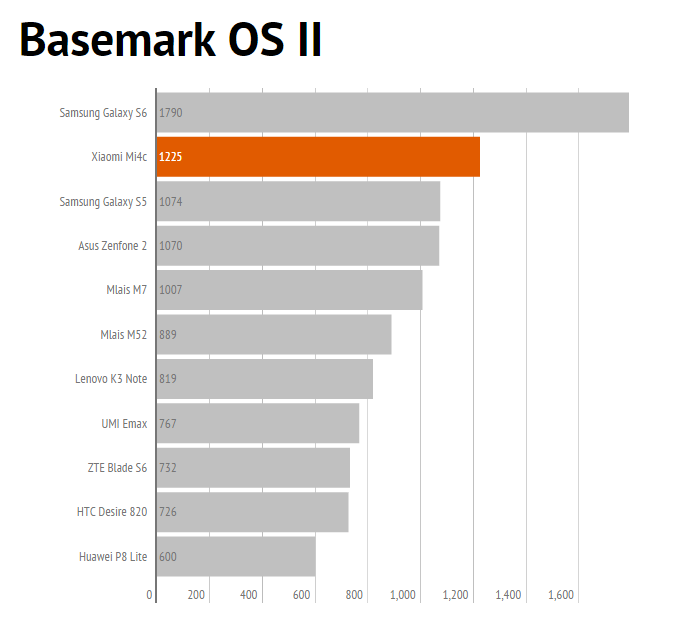 Basemark loves the Xiaomi Mi4c. In the Geekbench 3 single-core test, we got 1259 points, almost twice as much as on a Snapdragon 615 device. The multicore score was 3054. The big A57 cores are obviously great to have for single-thread apps.

Bottom line, performance should not be an issue, although avid gamers might want a device that doesn’t throttle as much. The Xiaomi Mi4 gets you near-flagship performance for mid-range money, even if you go for the cheaper 2GB version.