The R9 280X is part of the latest AMD generation of graphics cards known under the Volcanic Islands codename, but it’s not exactly new. The new portfolio of Volcanic Islands graphics cards consists of the Radeon R9 280X, R9 270X, R7 260X, R7 250X and R7 240, and two more yet to arrive are Radeon R9 290X and R9 290. Of course, other Pro versions are probably in the works.

This time AMD decided not to launch the fastest cards first, opposite to what we saw with the two previous generations. What many of you already know, all the “new” cards with exception of the R9 290X and R290 are actually rebranded, retweaked and newly priced products from the current HD 7000 series.

AMD’s new naming scheme is not all that great, but it’s also not hard to understand and remember. If you spot R9 within the card name it will tell you this is an enthusiast grade product, and the R7 prefix denotes a mainstream product.

Note regarding the R9 enthusiast grade products are yet to come and the R9 290X and R9 290 will be only and truly new enthusiast graphics cards based on the new Hawaii GPU.
However, the HD 7970 earned a rock solid reputation for being great for gaming and relatively light on your credit card. We believe gamers will continue to adore the R9 280X due to its attractive price point. Both the R9 280X and HD 7970 GHz Edition are now available for about 280 euro. However note that the HD 7000 cards are getting some interesting discounts, so some better deals may be available.

AMD gained plenty of attention with its various gaming bundles, but unfortunately we have some bad news for gamers who are still keen on the Never Settle voucher program, which includes three free games. AMD decided, at least for now, not to include the game voucher with R9/R7 series graphics cards. We are confident that with this marketing the stock of HD 7000 cards is soon to be emptied.

So, XFX is also playing the no-Never-Settle-voucher game, but at least it has made some important design changes to the PCB and came up with a new cooler, thus making its Radeon DD R9 280X 1000M card very attractive. 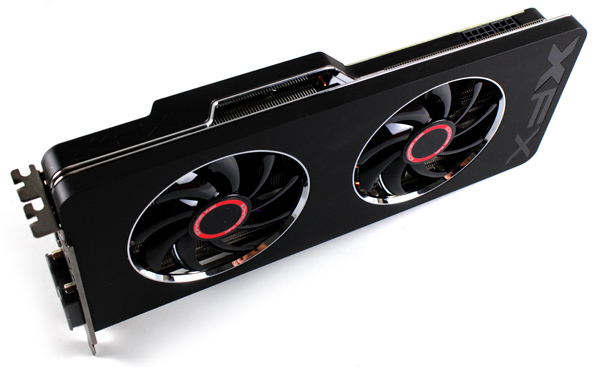 The R9 280X is based on the 28nm Tahiti core (4.3 billion transistors) which features 32 compute units and 2048 stream processors based on Graphics Core Next (GCN) architecture. Next to that we have 32 raster operation units (ROPs), 128 texture memory units (TMUs) and six 64-bit memory controllers meaning 384-bit memory interface connected to GDDR5 memory. All in all we have exactly the same set of components presented in the Radeon HD 7970 GHz Edition. DirectX 11.2 is supported along with OpenGL 4.3 and AMDs own new low level programming interface known as Mantle (which is also supported on all AMD cards with GCN).

During its latest event AMD also announced the new TrueAudio feature. This should allow hardware-accelerated audio processing in the GPU, but developers have to code its games and applications to support TrueAudio and not all older cards will support it. There are three upcoming games, Thief, Murdered and Lichdom with support for the TrueAudio. With the ability to process over a hundred independent audio streams in real time alongside with the game or application processing it will be possible to incorporate great audio effects e.g., positional data to audio sources.

R9 280X does not come with TrueAudio, but due to lack of games or apps created with support for the TrueAudio we do not really care at the moment. However lack of the TrueAudio can be seen as drawback in the future, but who knows, it might not be relevant in this card’s product cycle. It all depends on developer support.