Haswell is nothing new to most of our readers. This was Intel’s codename for what will be known as the fourth generation Core technology available for desktop and mobile computers, and we’ve been talking about it for ages. This is a “tock” product, based on Intel’s 22nm manufacturing process and the real revision of a core. Ivy Bridge (2012) was a 22nm shrink and optimisation of Sandy Bridge (2011), a 32nm processor, while Haswell (2013) is a new 22nm architecture.

Haswell has much improved graphics and improved processor core and enhanced overclocking. These would be the key pillars, but let's not forget some neat little things such as Intel’s fully integrated voltage regulator (FIVR). This is important, as the voltage regulator gets on the die consolidating five other Voltage regulators including the one for processor core, graphics VR, system agent VR and IO VR. This ensures better arch flexibility and finer grain on-die processor delivery.

Haswell, or the fourth Core generation, also supports DDR3 and DDR3L 1.5V memory and the chipset of choice is codenamed Lynx Point and it is branded as Intel’s 8-series chipset. 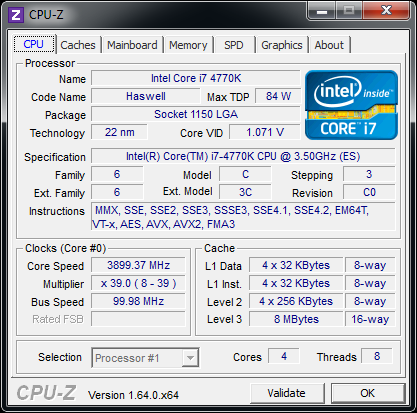 The Core i7 4770K processor works at 3.5GHz while the Turbo overclocks this CPU to 3.9GHz. The maximum TDP of this processor is 84W. As you can see form the CPU Z, our sample was maxing out at 3.899.37 MHz even at the idle time of making a screenshot and it needed 1.071V for that. We didn’t have enough time to play with overclocking, but we will do that in our full review. The Core i7 4470K has 8MB of cache. To refresh your memory the previews generation Ivy Bridge based Core i7 4770K had the same 3.5GHz core clock, 3.9GHz max turbo frequency and 77W TDP, while the new Core i7 4470K has 84W.

Core i7 4470K comes with Intel Graphics 4600 that works between 350MHz and 1.25GHz based on the GT2 core. The graphics architecture is similar to Intel HD Graphics 4000 series seen in the Core i7 3770K, but we will let the numbers speed for themselves. During out testing the GPU was hitting 1.25GHz for the GPU core and 800MHz for the memory, getting to 56 degrees Celsius.