Previous generations of Geforce reference designs featured relatively noisy coolers, thus making non-reference cards with custom cooling a lot more appealing. Things have changed for the better, as the reference GTX 770 cooler is pretty good, as it doesn’t compromise on noise over performance.

This makes it much more difficult for Nvidia AIBs to come up with something better and worth the premium. Gainward thought it could pull it off, so it went for a new version of the Phantom cooler and slapped it on top of a card with a 104MHz factory overclock.

Gainward’s GTX 770 Phantom cooler is definitely a looker. The Phantom’s fans are hidden behind the heatsink so it may trick users into thinking that it’s a passive cooler. Still, if you peek through the heatsink fins, you’ll see silhouettes of the three fans.

This is what the reference Geforce GTX 770 looks like. 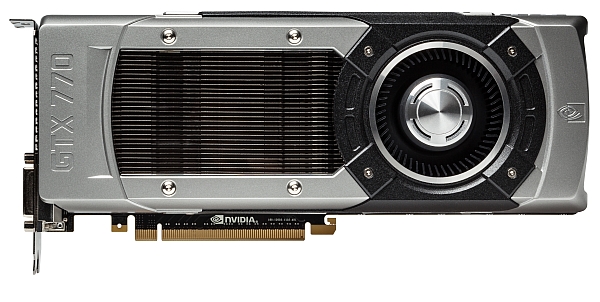 Gainward decided to use the baseplate to strengthen the PCB and provide a better cooling to the memory chips and MOSFET. The card has 2GB of GDDR5 memory.

All the memory modules at the front of the PCB are tucked away underneath the reinforcement plate.

As far as video outs go, what we have here is the classic Gainward Quattro-port design, i.e. two dual link DVIs, HDMI (1.4a compatible) and DisplayPort out. Note that all four video outs can be used simultaneously. Nvidia included an HDMI sound device within the GPU, so there is no need for connecting the card to your SPDIF out to get audio and video via HDMI. 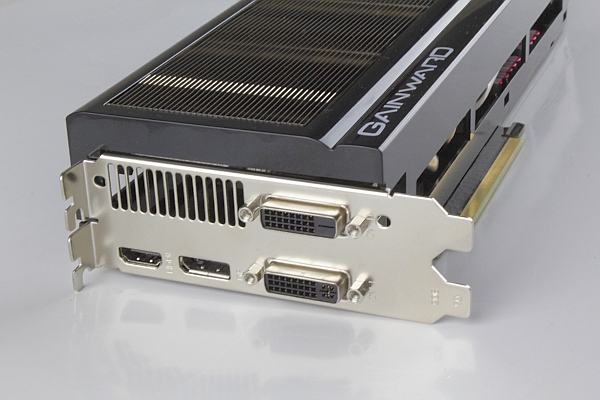 The GTX 770 Phantom is ready for multi-GPU action. In addition to standard dual-SLI, it can also be used in triple- and quad-SLI setops, as it features two SLI connectors. 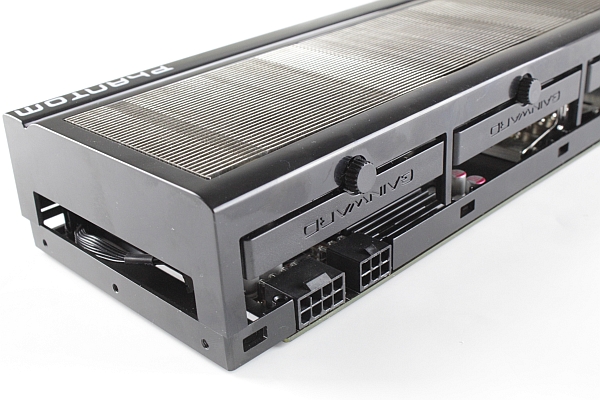 A combination of 6-pin and 8-pin power connectors is used on the GTX 770. The TDP for the reference card is 230W. The Phantom card uses an OnSemi NCP4206 voltage controller.