Certified Windows 8 drivers are already available for graphics cards from both sides, AMD and Nvidia. We decided to use the latest beta drivers that, although currently lacking certificates, promise better performance. We used dual GPU graphics cards because they put greater demands on the driver.

Dual GPU HD 7990 ended up significantly slower in some tests in Windows 8 than in 7, so we checked the results with a single GPU HD 7950 as well. Note however that AMD has not yet certified any drivers for its dual GPU HD 7990, because the card hasn’t been officially introduced yet. Power Color is the first AMD partner that went for the HD 7990 and dubbed it Devil 13, showing just what two Tahiti GPUs are capable of. We’ve heard of few other partners that introduced the card, but apparently it is a Power Color card under another name.

If you’re planning on strapping your rig with an HD 7990, you should know it has certain issues on PCI-E 3.0 slots with some motherboards. This can be fixed with a BIOS update (if such is available for your motherboard). We used the HD 7990 card with EVGA’s X79 FTW motherboard, but not before we disabled GEN 3 support in the motherboard BIOS.

We had no visible microstuttering etc. while gaming. The HD 7990 wouldn’t run Crysis 2 in CrossFire under Win 7. There is an application profile that’s supposed to fix this, but when we got down to it, we already exceeded the number of allowed installations for the game. EA support is currently offline (as well as previous two days) so we cannot investigate the matter at this time. We tried our luck with EA’s German support team, but we gave up after half an hour of waiting on hold. Unfortunately, this isn’t the first time we’ve called tech support over authentication and we really feel for gamers or users who have to go through this.

As you can see from the results below, gaming results in Win 7 and Win 8 are pretty much the same. 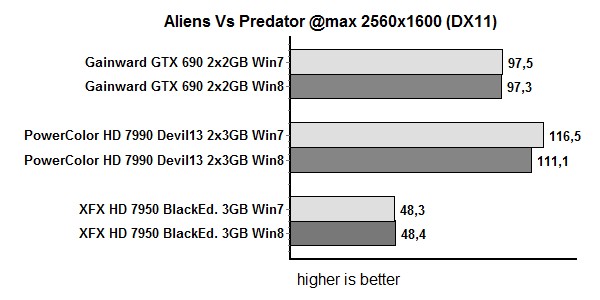 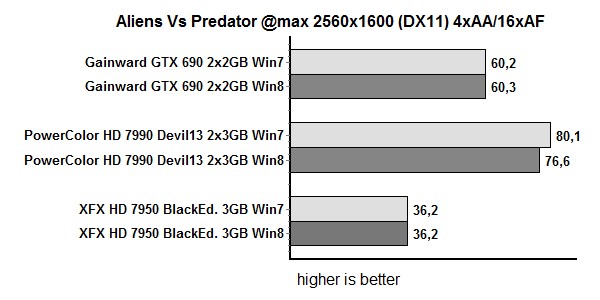 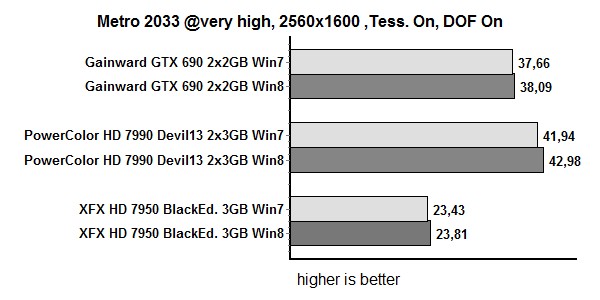 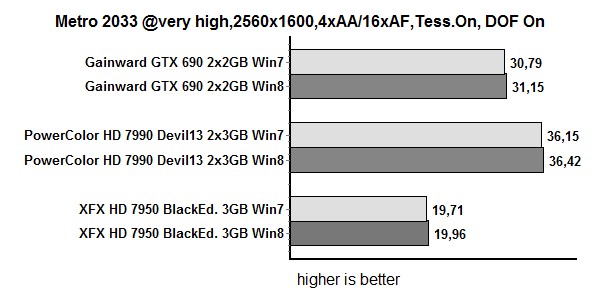 Gaming under Win 7 or Win 8 largely depends on graphics drivers, so Nvidia and AMD made sure to provide quality drivers for Windows 8. In general, gaming with Win 8 isn’t much different, although we’re sure many will stick to the lucky 7.