So far, Nvidia launched two cards based on the GT106 GPU – the GTX 660 and GTX 650 Ti. Our today’s guest is the GTX 660 Ultra Charged graphics card, which should provide for pleasant gaming at 1080p. Although we’re reviewing the GTX 660, we think it’s important to explain why the same GPU isn’t as fast on the GTX 650 Ti as on the GTX 660.

Additionally, the GTX 650 Ti doesn’t feature GPU Boost technology that would automatically overclock the GPU, which can be found on the GTX 660. The GTX 660’s reference Base clock is 980MHz, but the GPU overclocks to 1033GHz+ when there’s thermal and power headroom.

The picture below shows Point of View / TGT GTX 660 Ultra Charged graphics card that has a factory overclocked GPU and memory. 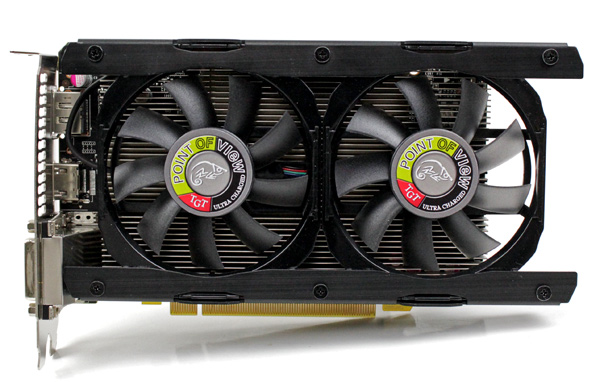 The card you see belongs to LLS series (Low Leakage Selection). This implies that the Ultra Charged’s LLS GPU should deliver superior auto-overclocking compared to the standard GTX 660. In other words, the Ultra Charged’s clock distribution should beat that of regular GPUs found on the rest of the GTX 660 pack. Of course, TGT’s tuning utility, aptly named Big Bang, will be of much help in this task. In case you didn’t know, the utility was developed by TGT exactly for this reason – making LLS chip selection easier, and you can find it, here.