Review: Quiet as a breeze, strong as storm

Gigabyte has been busy as of late improving its existing graphics card coolers and designing new ones. Our today’s guest is the company’s HD 7850 OC graphics card, notable for Gigabyte’s WindForce 2x cooler, which promises silence even when the card is working hard. That Gigabyte is ready for non-conventional designs is clear from its GTX 680 Super Overclock card, which comes with five fans and nine heatpipes, but more on that on another occasion.

The card’s name, HD 7850 OC Windforce 2x, says it’s a factory overclocked card. The GPU has been overclocked by 115MHz but the memory was unfortunately left at reference 1200MHz (4800MHz GDDR5). We’ve noticed that many overclocked AMD and Nvidia cards come with overclocked GPUs but reference memory clocks. We’d much rather see overclocked memory because users who buy overclocked cards usually don’t want to mess with any further overclocking, i.e. want their pet juiced out straight out of the box, and quite understandably so.

Gigabyte HD 7850 OC WindForce 2x is on the picture below. 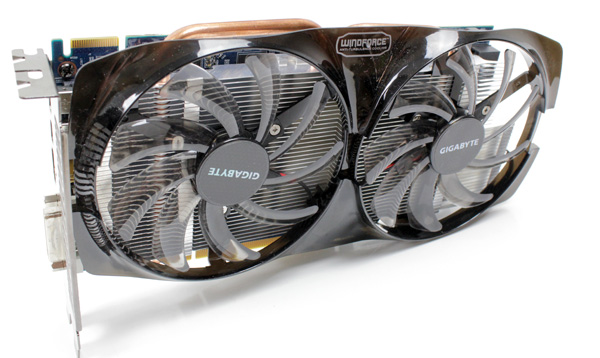 We’re sure you want to know more about WindForce, but before we move onto that part, let us say something about the HD 7850 first.