Asus recently announced the Transformer Prime, a Tegra 3 powered quad-core tablet that can also be used with a keyboard dock, but we won’t write about that one this time around.

Many people who would like a tablet shy away from the whole concept due to the lack of a physical keyboard and the main argument against tablets is that you need a keyboard for any serious work. Don't get me started that tablet with a keyboard is a notebook, but at the same time Asus Transformer slider is actually a tablet with a slide keyboard, as the name implies. 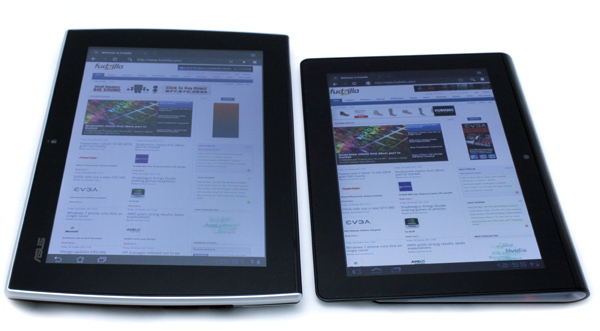 We did a little experiment and showed off the Asus Eee Pad Slider, Lenovo Pad and Sony S 7-inch tablet and ask our non IT friends asking for an opinion. Surprisingly both female and male said that the Asus Transformer Slider would be their choice as it had a keyboard and an integrated stand. Some ladies preferred the Sony due to its slick design and we agree that Sony S got the looks. 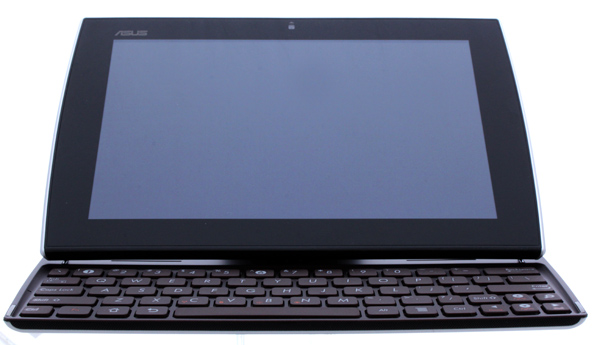 The full name of the tested device is Asus Eee Pad Slider SL101 and the dominant feature you notice once you see it is the slider keyboard. If you don’t slide the keyboard out, the Eee Pad slider is just as any other tablet, but significantly heavier than the competition. It’s a 10.1-inch tablet with an LED backlit 1280x800 IPS screen, which is standard for most tablets around. The display has ultra-wide 178-degree viewing angle and it’s protected by scratch resistant Corning Gorilla Glass. Overall the display looks just fine. 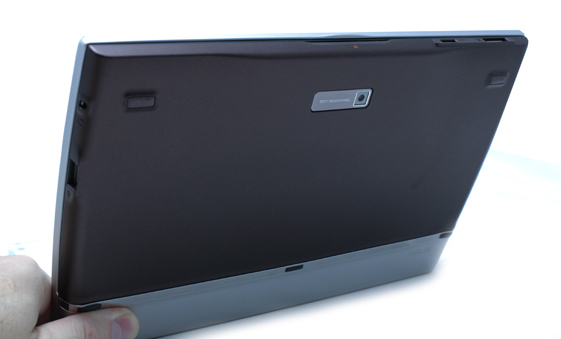 The Eee Pad slider is based on the Tegra 2 SoC, clocked at 1.0GHz and performance wise you cannot really tell the difference between this tablet and Eee Pad Transformer, or Samsung Galaxy 10.1, or any other Android 3.x tablet.

The Slider comes with 1GB of RAM, 16GB or 32GB of storage plus a one year of unlimited Asus web storage. The tablet features 802.11n support, along with Bluetooth v2.1, but unfortunately it doesn’t come with 3G or faster mobile internet support. It has two cameras, 1.2Mpixel front facing camera and 5Mpixel rear camera. GPS, light sensor, gyroscope and compass are also on board.

On the back side, you will find a mini HDMI connector and charger, while the right hand side holds the micro SD slot, power and reset buttons as well as volume buttons. The left side features a much needed USB port and audio jack. The device comes with Android 3.2 at the time but Asus claims it will get its portion of Ice Cream Sandwich at some point. The Eee Pad slider packs a 25Wh lithium-polymer battery rated at 8 hours of battery life.

Let’s not forget to mention that this 273 x 180.3 x 17.3 mm tablet weights 960 grams, which is significantly more than the competition, all due to the integrated keyboard, of course. 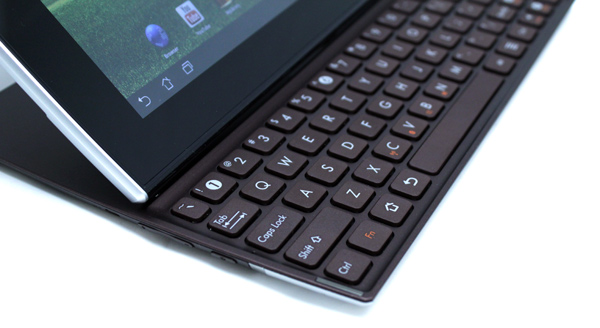 Once you pop the keyboard out, the first thing you notice is that the keyboard is quite narrow, much more cramped than on a standard netbook. Despite that, keys are comfortable and after a short adjustment period, you will be able to type just fine. The keys are quite big and comfortable to use. This keyboard beats any touchscreen input system and for anyone that does a lot of emails, writing [Like us. Ed], the keyboard makes these everyday tasks much faster. Asus Transformer and Transformer Prime also have keyboards that can be removed, but for people that don’t want to carry a removable keyboard around the Slider might be a better choice. 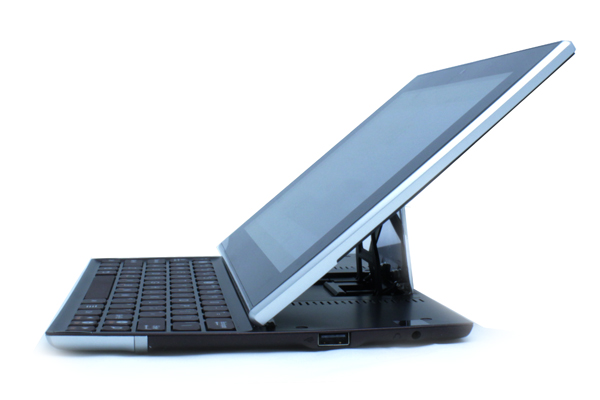 The bad side of the slide out keyboard is that you cannot adjust the screen angle, it is always at a fixed angle that will fit your reading from sitting position but it won’t do well in bed. You just won’t be able to adjust a proper angle if you are at your sofa and tablet is on your belly, it just won’t work, while the Transformer or any laptop will let you adjust an angle on a display. 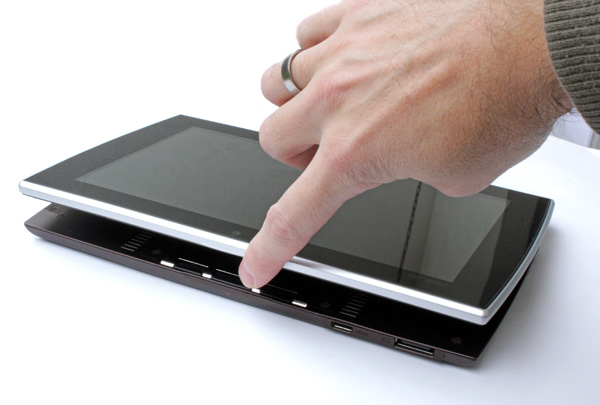 Popping out the keyboard on an Eee Pad slider for the first time is a somewhat traumatic experience as you don't know how much force you should put behind the keyboard sliding motion. Personally, I was concerned I would break something, but luckily I didn’t. Once you do it a few times, you will get use to this, it will feel natural, but we believe the mechanism could have been better.

Android 3.2 works similar to what we've seen on other Tegra 2 based tablets, but we have to say that the integrated USB port makes a difference. You can use your USB key and copy a file and you would be surprised how complicated this basic task can be with other Android tablets, not to mention the iPad. 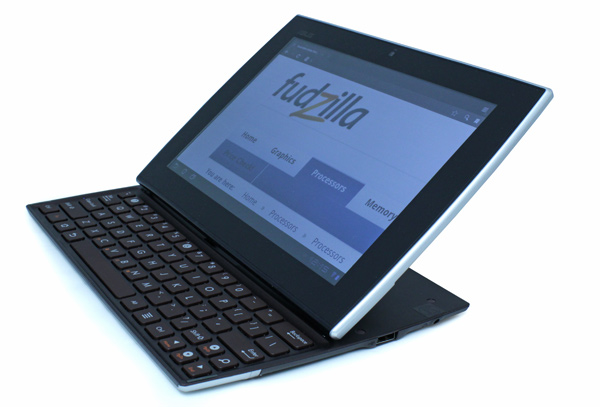 For PC lovers this will be a big plus, you will be able to use your USB key at all times without any hassle. The thing that we didn’t like was the camera. The photos were really terrible, and in low light home environments, they were pretty much unusable. The camera is definitely the biggest downside to the Slider. 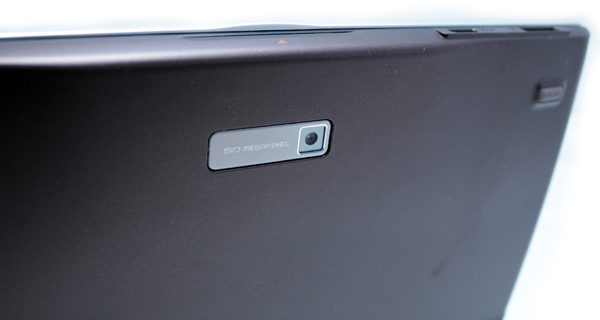 Asus also tries to differentiate its tablets from the rest of the Honeycomb crowd with its own applications and it comes with Polaris office. You can type on it, it’s not Word but it can compete with some parts of Open office package. The rest of the software list includes ASUS Launcher, MyLibrary, MyNet, MyCloud, File manager, Kindle books, Zinio Magazine, PressReader and ASUS sync. Naturally you can install everything that Android market or other app store offers.

We tried to play HD videos from YouTube as well as some HD Video clips and this worked just fine. The speakers are decent, but the Sony Tablet S is better in the sound quality department.  HDMI works well, and we like the fact that Asus gives you a way to connect your tablet to a TV, so it works out of the box. 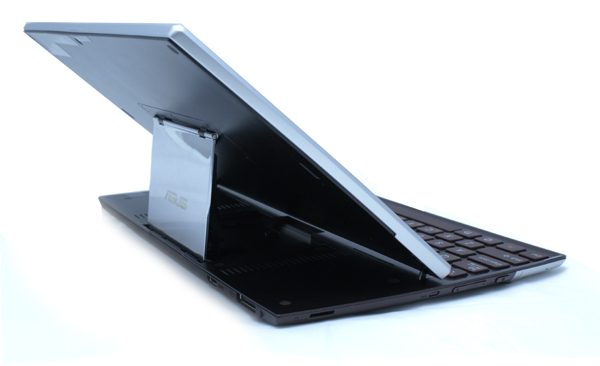 The battery was not the Slider’s strongest point. We managed to squeeze some six to seven hours of battery life, mostly browsing the internet, typing an occasional email and watching some vides – basically what everyone is likely to do with media tablets. Watching videos continuously will drop you to the 5 to 6 hour range which is not great. We've seen much better scores from tablets that weights much less, but in Slider’s defense, they didn’t had a slide-out keyboard. Transformer Prime or the original Transformer both have much better battery life when they are used with a keyboard dock.

The Asus Eee Pad slider SL101 32GB currently sells for around €500 in Europe, while in the US Best Buy will gladly sell you a 16GB version for $480, or the 32GB version for $580.  The price is comparable to Transformer without a dock, as well as other competing tablet based on Tegra 2 and Android 3.2. Let’s just mention that €499 gets you a Transformer Prime with Tegra 3 quad-core without keyboard.

The Slider comes with an integrated keyboard and this is its strongest point. The keyboard is somewhat cramped but it beats serious typing on the touchscreen. The only real downside to the slide keyboard is its fixed angle.

So, this is a tablet that will let you browse the internet and type emails or IM with ease, but it is not that big on battery life. Still, it beats keyboardless models in terms of productivity. Also, it’s slightly heavier and thicker than plain tablets.

If you do any serious typing and you don’t want to get separated from your tablet keyboard ever, this is might be the right tablet for you. It is one of the better Android tablets we've seen, but it’s not perfect.

Last modified on 26 December 2011
Rate this item
(0 votes)
Tagged under
More in this category: « Innergie mCube Pro Power Adapter put to the test Lenovo’s affordable Ideapad A1 put to the test »
back to top