Cooler Master recently updated its CM Storm series with one of the key pieces of gamers’ arsenals - a quality gaming headset. The CM Storm Sirus headset boasts 5.1 surround sound, with four discrete speakers on each side.

CoolerMaster ships the Sirus with so called “Tactical Mixing Console’, which is a separate piece of hardware used for independent channel volume settings. 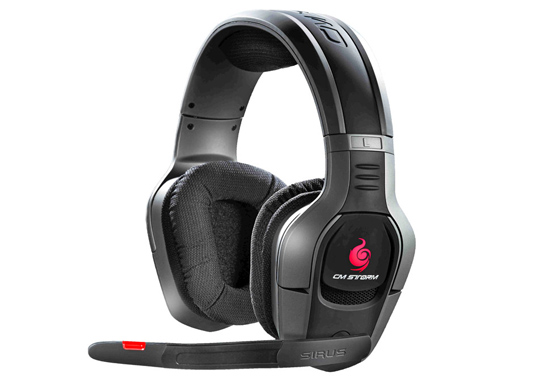 CM Storm obviously wasn’t keen on experimenting with its first headset, so Sirus has tried and true classic design. 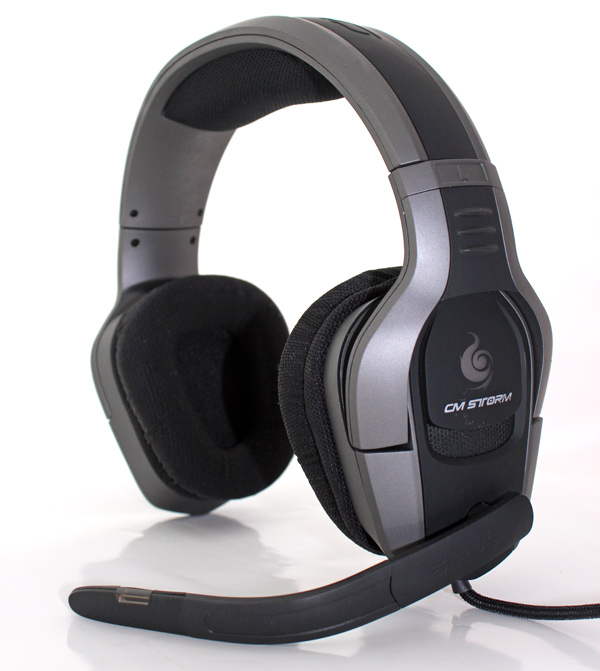 The headset is made of hard plastics while the microphone can be easily moved thanks to its rubber-like build. Furthermore, the mic can be rotated and placed in a way where it won’t get damaged during transport. Note that Sirus cannot be folded like some modern headsets. 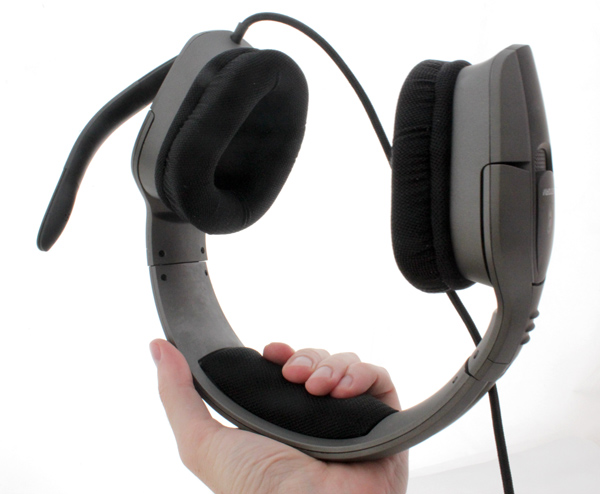 Thanks to quality ergonomics, we could wear Sirus for a while without feeling pain or pressure. That the Sirus weighs around 400 grams is not something you’ll notice a lot as you’ll be immersed in gaming/music in no time. The part that leans on the tip of the head comes with a thick piece of foam that neutralizes pressure. You may think that 400 grams is too much, but note that some high-end headsets weigh as high as 500 grams. 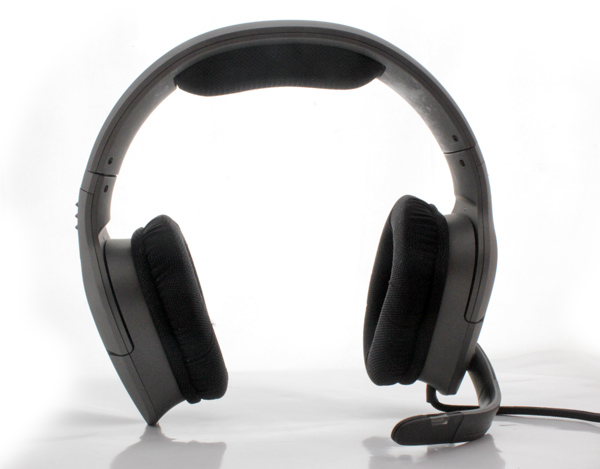 Sirus can be easily adjusted for various head sizes and the earpads can be slightly rotated as well in order to make a better fit. Those who have glasses should not be overly concerned as the mechanism is lax enough not to apply pressure on your head. 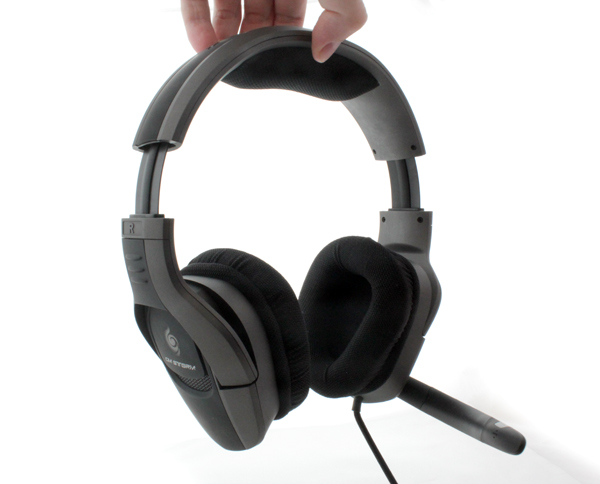 CoolerMaster included two types of earpads – the standard ones and artificial leather ones, which tend to provide slightly better isolation. Users with glasses may notice that the leather earpads are slightly rougher, but not nearly enough to cause discomfort.

There are LED lamps in the headset, confirming that this is a CM Storm product.

The headset cable is 120cm long and has a male cinch at the end, which can be connected to your computer in two ways. One of them is to connect the Sirus to its Tactical Mixing Console, where the Console is connected to the computer via USB. The other method is to use the adapter that ends with 3.5mm jacks and connect it directly to your soundcard’s 5.1 outs. 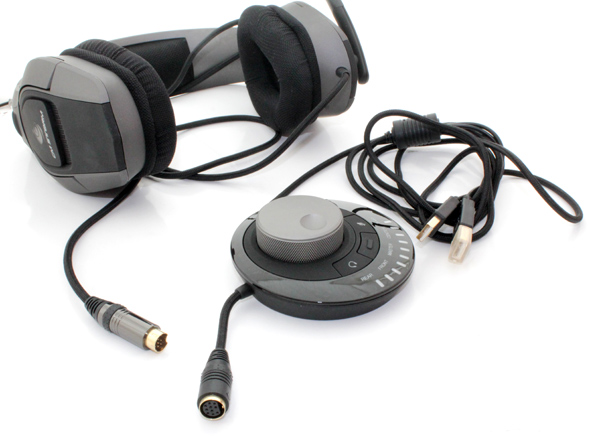 The cable connecting the console to the computer is more than 2m long, whereas the 3.5mm jack cable is 90cm. 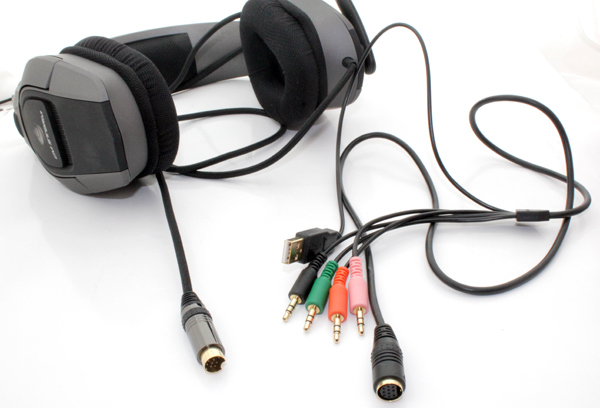 The USB that is found next to the 3.5mm jacks is there to provide power for LED lamps and is not necessary for normal functioning. 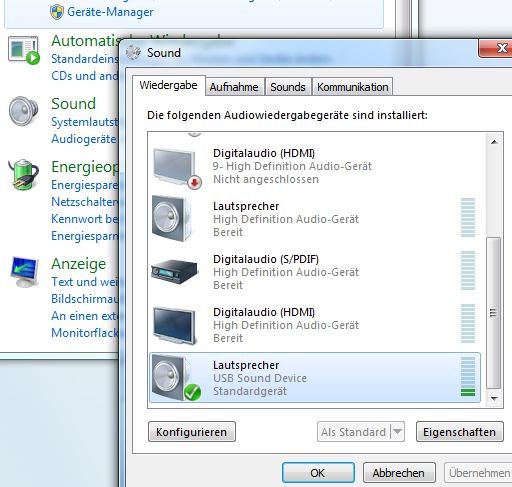 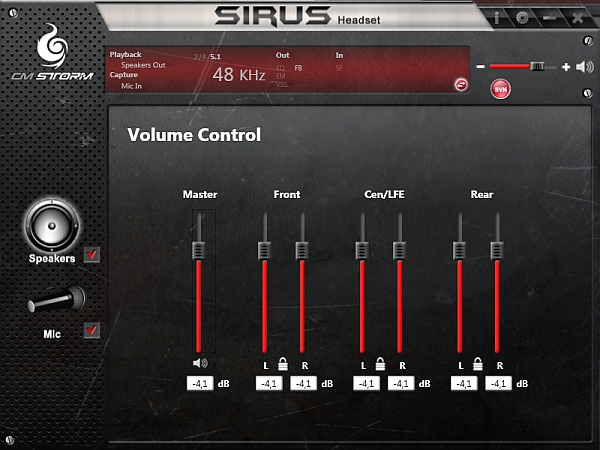 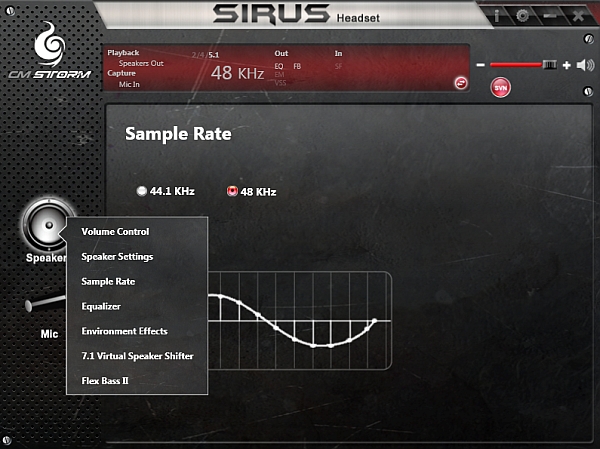 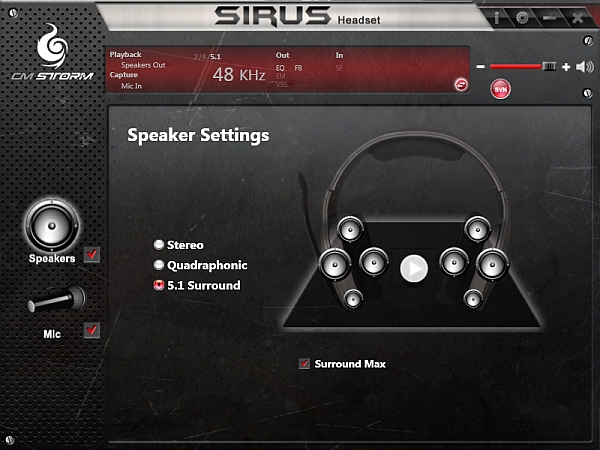 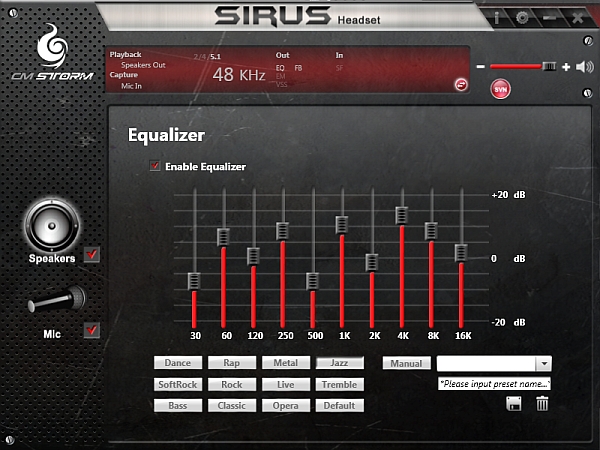 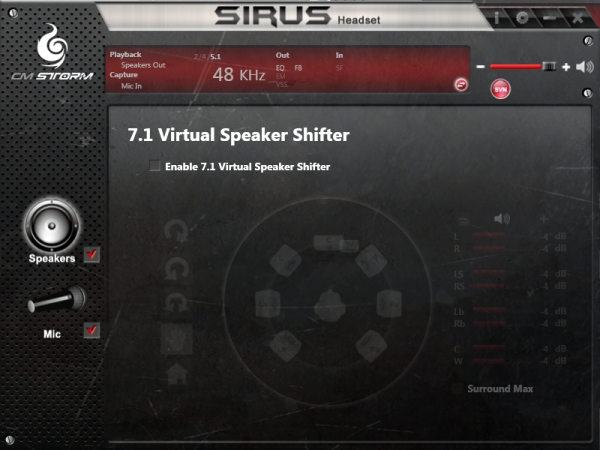 Mic options list Magic Voice, which is an option for voice muting. 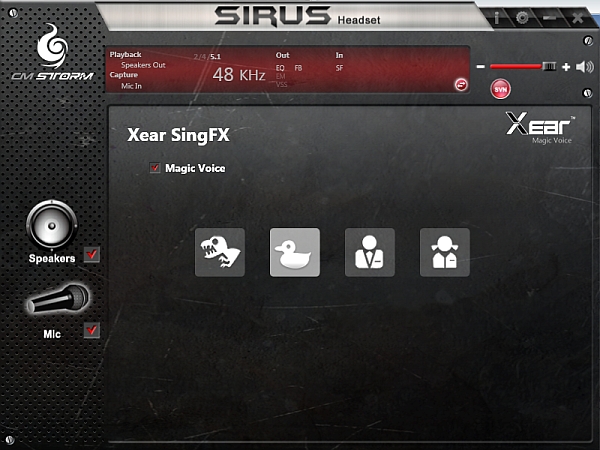 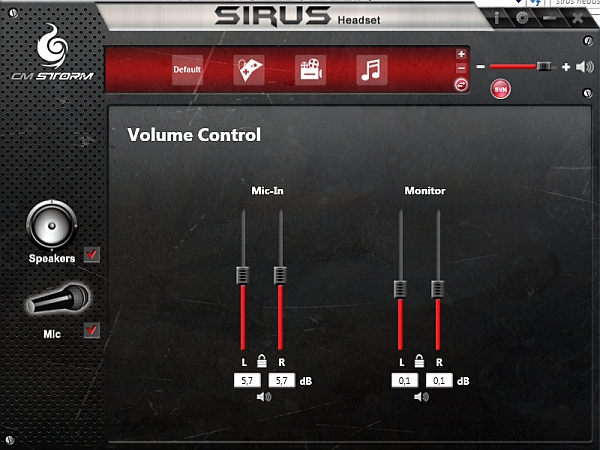 The Tactical Mixing Console is pretty handy and looks nice as well. You can use the console to set loudness of individual speakers, turn the mic on and off or shut down the headset and switch sound to speakers, if there are any on your rig.

The console is small and will fit in your hand, but since it weighs about 280 grams, you probably won’t be moving it from where you put it. The console has rubber anti-slipping pads. The console’s wheel is quite efficient, as it allows for volume control with a single finger. 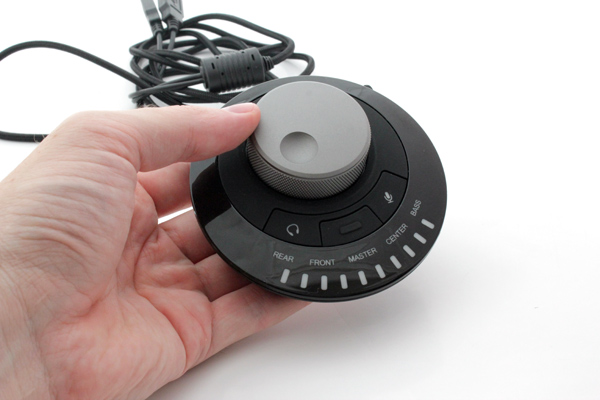 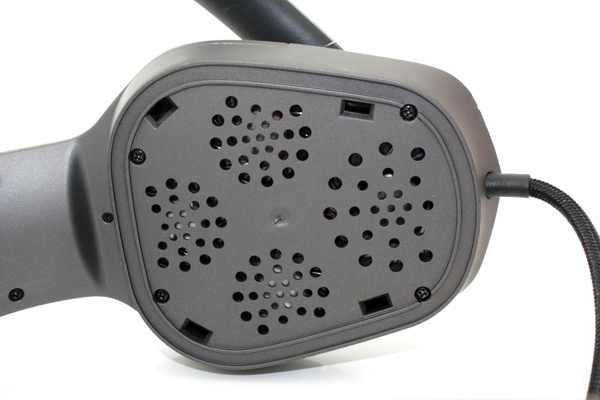 The front, rear and central channel speakers have 30mm radius, whereas the bass speaker has 40mm. 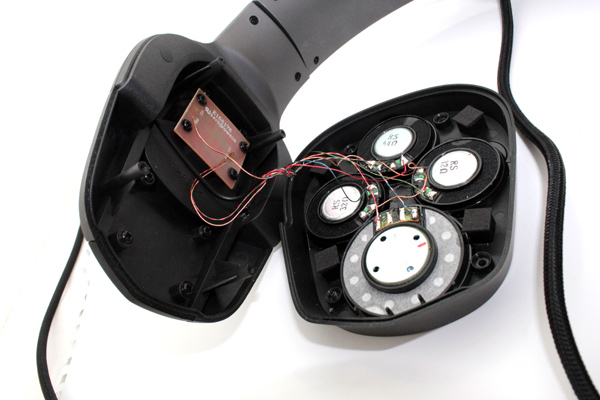 The uni-directional mic with background noise cancellation is quite good at what it does. Other players will hear you clearly but not that loud. Background noise is not likely to end up on the channel, at least not excessively. That the mic lacks loudness was clear after meddling with Microsoft’s driver as well. Namely, we had to bring the mic quite close to our mouth in order to receive confirmation that the mic is recognized. Skype ran instantly and quite well. 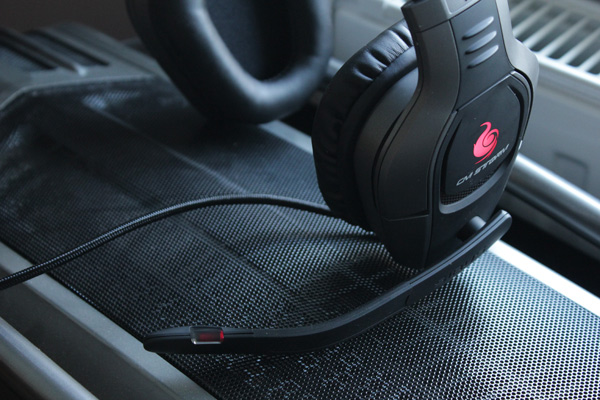 The Sirus is currently the only headset in the CM Storm line of products. Sirus provides 5.1 surround sound and can be connected to a computer via analog connections (3.5mm jacks) or via the included Tactical Mixing Console, which in turn connects via USB. Surround sound enables quite good pinpointing of the enemy’s position.

The Tactical Mixing Console is quite useful, both for gamers and all other users, because it allows for easy control without having to interrupt your activities. Furthermore, the Console works without having to install drivers. Capabilities are many, as users may easily silence sounds of battle ahead and increase volume of sounds from the back in order to pinpoint the danger.

CoolerMaster aimed the Sirus at high-end gamers, but it will do more than fine for those who wish for quality sound. The Sirus goes for €115 here. 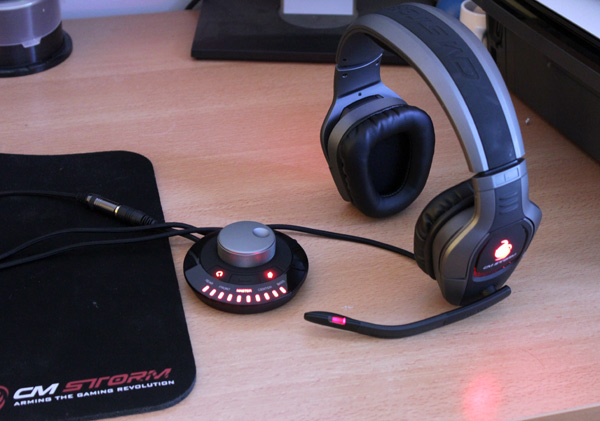