While the ASRock ION 330HT box is an original one, we used a ITX case with 80W PSU for the E-350 and D525. We also removed the WLAN card of the Zotac board, so Zotac has no disadvantage due to an extra card. First, we take a look at power efficiency in Cinebench, meaning under very high and threaded loads.

The efficency of both the Intel Atom and the AMD E-350 are dissapointing. Any Intel desktop CPU is more efficient and of course ARM is also miles ahead. 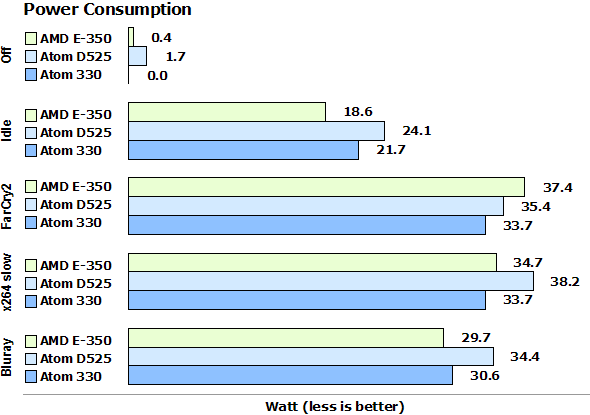 In the power consumption department the old Atom/ION combination still leads slightly but just about 4W more for either Atom D525+ION2 and E-350 are not that bad either. The Zotac board draws 1.7W when switched off, which is dissapointing, while the ASRock ION box did the correct thing and does not use any energy at all. The blu-ray test was done with a file on the SDD, so using a real drive would add about 7-8W.