We managed to hit 990MHz for the GPU and 1100MHz for the memory by running the fan in AUTO mode, and it resulted in 8% better results in Aliens vs. Predator. Had the HD 6870 been just a tad bit louder during our tests (AUTO fan mode), we’d call the card loud, but it still isn’t unbearable.

On the other hand, the card is quiet when idle.

XFX HD 6870 is pretty quiet when idle, and it doesn’t get loud during gaming either.

The XFX HD 6850, on the other hand, gets loud both when idle and when gaming and it is definitely louder than XFX HD 6870. The BIOS sets the fan to 42% RPM in idle mode making the card pretty loud. Furmark testing caused the XFX HD 6850 temperatures to go up to 65 degrees Celsius, which speaks volumes on the cooler's quality. Furthermore, it also means that you can sacrifice a couple of C and make the card quieter.

XFX HD 6870 didn’t go over 84°C during our tests. The cooler was almost inaudible in idle operation (43°C), and while it gets louder in FurMark tests, it isn’t too loud. Of course, fan speed can be controlled via Catalst Overdrive.

Faster cards usually have two 6-pin PCIe power connectors but the HD 6870 had to have two. A single Watt that is the culprit, as the card will draw 151W while one connector can supply “only” 150W. However, the additional power connector allows for overclocking beyond 900MHz.

We measured our entire rig's consumption after stressing the graphics with FurMark. The tests show that HD 6870’s consumption is similar to the GTX 460 1GB. 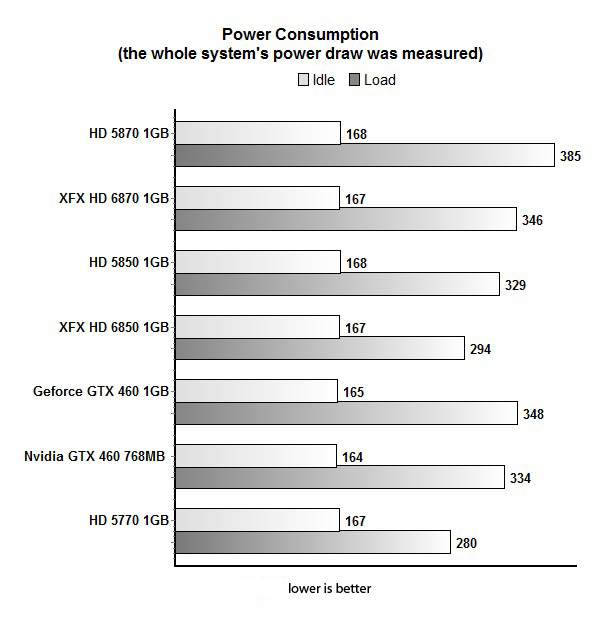