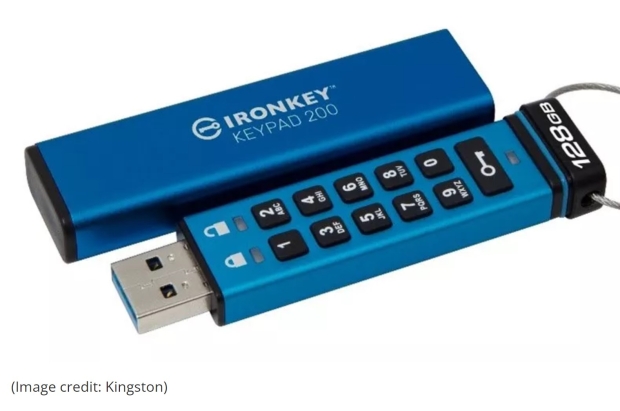 Kingston Digital has released a new secure USB which stuffs the drive with more secure componants than you can poke a stick at.

The Kingston IronKey Keypad 200 (KP200) is apparetnly designed for consumer data, although the sort of person who wants this level of protection might either be a regular wearer of a tin foil hat or be attempting to run a crack lab in their basement.

It offers XTS-AES 256-bit hardware-based encryption as part of a "feature-rich" and operating system-independent alphanumeric keypad.

The KP200 also incorporates a built-in rechargeable battery, so users can unlock the drive using the keypad for PIN access, without using the accompanying software. Users can access their data by plugging the drive into any device that supports USB Type-A Flash storage.

The drive’s circuits are coated with tamper-evident, tough epoxy to prevent access to its internal components without damaging them. The keypad is coated with a protective polymer layer to prevent the analysis of fingerprints on the keys.

It locks the user PIN after ten failed login attempts, but if both PINs are enabled, the admin can be used to restore a user PIN and access the drive.

Kingston said that if the admin PIN is incorrectly entered ten times in a row, the built-in brute force attack protection will crypto-erase the drive, permanently destroying the data and resetting the device.

Last modified on 14 September 2022
Rate this item
(1 Vote)
Tagged under
More in this category: « HP bugs not fixed for a year AMD to officially unveil B650/B650E motherboards on October 4th »
back to top