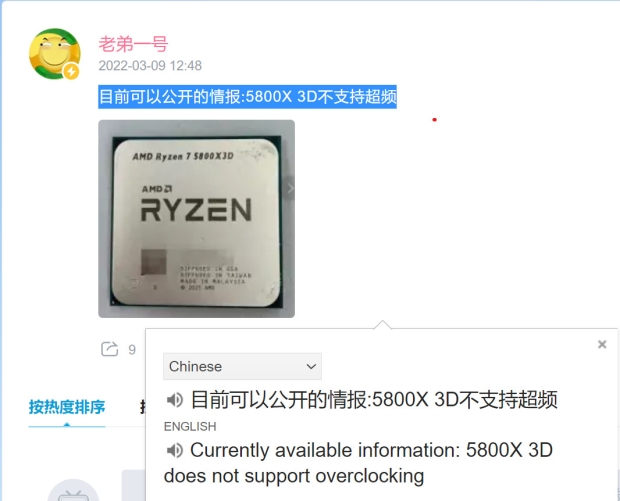 AMD is planning to launch several new Ryzen models headlined by the Ryzen 7 5800X3D which will apparently feature 100MB of cache due to its new 3D V-cache.

While AMD says that the 5800X3D is on average 15 per cent faster than its 12 core 5900X but the dark satanic rumour mill has manufactured a hell on earth yarn that the 5800X3D apparently doesn't support overclocking.

The source of the rumour Bilibili posted what appears to be a photo of the Ryzen 7 5800X3D which indicates that he knows what he is talking about.  However, if this is true it is a first for AMD's Zen-based processors as all Zen CPUs.

All of them have come unlocked out of the box and can be overclocked as long as you are running a B_50 or an X_70 series chipset motherboard.

What makes matters worse is that the Ryzen 7 5800X3D is an enthusiast-grade product and if it can’t be overclocked a bit it is largely pointless.

To be fair it is possible that the firmware version for the board on which the Bilibili user tested the 5800X3D does not fully support the processor as the SKU is a new, unreleased part.

Last modified on 09 March 2022
Rate this item
(2 votes)
Tagged under
More in this category: « Apple fuses two M1 Max chips for M1 Ultra Third generation Optane on the way »
back to top