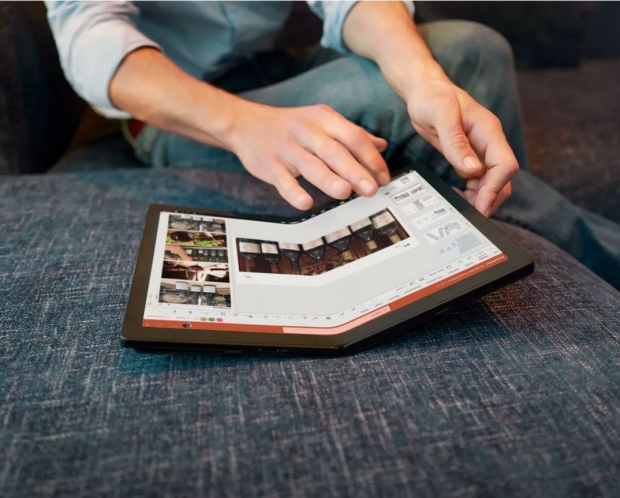 Lenovo has released what is being billed as its first folding PC.

The ThinkPad X1 Fold, which is available for preorder now, starts at $2,499 and was first hinted at last year.

The big idea is that you can use the Fold like a large tablet when it's fully unfolded, or divide the screen into two adjacent displays. You can prop the Fold up horizontally to use it like a full 13-inch notebook, with an optional detachable keyboard and easel stand. You can fold the thing up 90 degrees, turn it vertically, and use it like a miniature laptop - a touchscreen keyboard pops up on the bottom half. If you turn it horizontally you can use it like a book, with an optional stylus.

Then when you are done you can fold it up and easily carry it around without it taking up much space in your bag.

The Fold has Intel's Lakefield processors, two USB-C ports and a SIM-card slot, 8GB of RAM, up to 1TB of storage, and a 50Wh battery. It weighs 2.2 pounds and can come with 5G support.