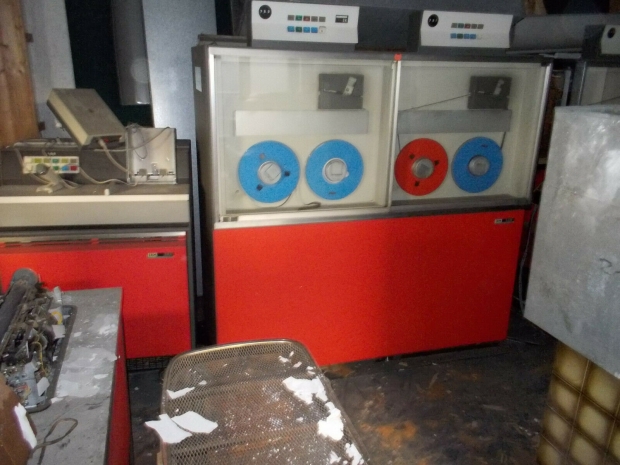 Adam Bradley and engineer Chris Blackburn have rescued an IBM 360 Model 20 mainframe from an abandoned building "in the backstreets of Nuremberg, Germany".

The pair bid €3,710 for the mainframe and then faced the challenge of bringing it home. The rescue was a little tricky given that the only useable access to the building was provided via the side door with three steps leading up to it.

The processor of an IBM 360 Model 20 weighs up to 620KG, and the internals are wire wrapped and not something you’d want to be dismantling inside of a building on a tight timeframe without power or manuals.

According to the pair's blog, somebody had decided in their infinite wisdom to run a mains water pipe lagged in foam behind the door impeding it’s opening to anything past 45 degrees.

Most if not all small/medium sized IBM machines from this era are equipped with wheels, but the building had been slightly damp, and this had lead to them sinking into the false floor tiles rendering them immovable.

They removed the front door, constructed a ramp, hired a 3.5t box van with a tail lift and extract the machines one by one. Airbag jacks to lift the machines and slide boards underneath the wheels to free them of their sunken floor divots.

Bradley is a railway software engineer, but he's also been involved in computer history for over a decade at The National Museum of Computing in Bletchley, England.

The machine will shortly be headed to the UK for a full restoration to working order, and the pair are planning to blog the entire process. Still not sure what they would use a 1970s mainframe for, but that is really not the point.

Last modified on 20 May 2019
Rate this item
(2 votes)
Tagged under
More in this category: « Euro chipmakers suffer because of Trump's trade war Huawei ban hurts US tech too »
back to top