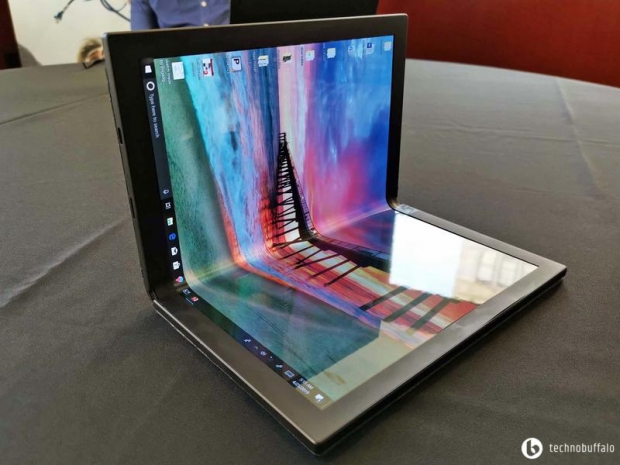 Seems everyone wants to fold things

Lenovo previewed “the world’s first foldable PC” at its Accelerate 2019 event in Orlando.

The foldable PC will be part of Lenovo’s flagship ThinkPad X1 line and will arrive in 2020. The outfit is not saying how much the unnamed PC will cost.

The screen is folded, like Samsung’s Galaxy Fold and Huawei’s Mate X smartphones. Lenovo is hoping to ship at least a million units of its new foldable PC in the first year.

We don’t know much about the device yet. Lenovo has said that it has been working on the device for “several years” with partners Intel, Microsoft and LG. He confirmed that those three have been part of the project from the beginning. Intel chips and Windows will be powering the foldable ThinkPad.

The screen comes from LG. It is a 13.3-inch single OLED 2K display with a 4:3 aspect ratio. It’s also a touchscreen and will support pen input.

Lenovo is pushing the “not an evolution” but a “revolution” mantra. Saying that the ability to fold a PC will increase portability of a PC significantly.

Lenovo doesn’t describe the device as a smartphone replacement and actually says it is only interested in being a laptop replacement.

The press release says: “ Wake up, fold it into a book, and start the day scanning your social media feeds in bed. Walk to your kitchen, unfold it, and stand it up for hands-free viewing of your top news sites. Hit your commute on the bus or train and morph it into a clamshell to catch up on emails. Get into the office, dock it into your multi-monitor setup and get to work. Go into meetings, take notes with its pen, and write on a full screen tablet. After lunch, set up the stand and use its mechanical keyboard to type out a few work emails. Come home at night, open it up and stream your favourite shows. Relax in bed, fold it in half and enjoy your latest read before going to sleep."

[What a nightmare our sad lives have become. Ed]

Last modified on 14 May 2019
Rate this item
(0 votes)
Tagged under
More in this category: « Intel’s boot guard is a doddle to defeat AMD to stream "Next Horizon Gaming" event at E3 2019 »
back to top