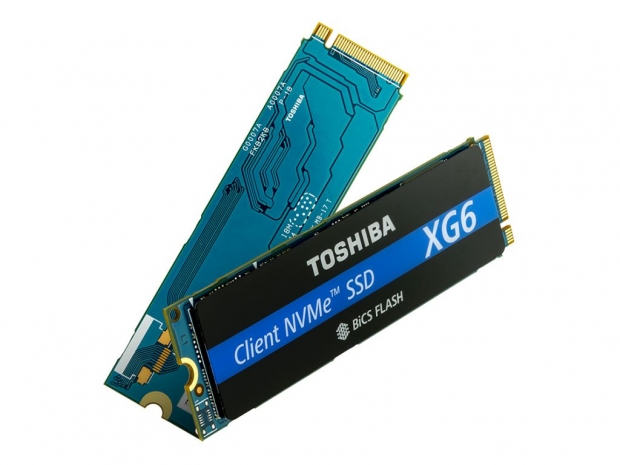 Toshiba has announced its new XG6 series client NVMe SSD series, which is the first to use the new 96-layer 3D BiCS NAND.

As a direct successor to the previously available XG5 client NVMe SSD lineup, the  XG6 series will bring both higher performance but maintain the same efficiency as well as reduced cost, thanks to the new 96-layer 3D TLC NAND.

Although based on the same controller as the Toshiba XG5, which never had a retail version, the new Toshiba XG6 series NVMe SSD will offer significantly improved performance, due to new NAND flash and some firmware optimizations.

According to details provided by Toshiba, the XG6 series will be available in capacities of 256GB, 512GB, and 1TB, and offer sequential read and write performance of up to 3180MB/s and 2960MB/s, respectively. The random 4K performance is set at up to 355k IOPS for read and up to 365k IOPS for write.

It will be available in a single-sided M.2 2280 form-factor and use PCIe 3.0 x4 interface with NVMe 1.3a protocol. The rest of the features include optional TCG Opal encryption.

Toshiba says that the new XG6 is currently sampling to OEMs and should start appearing in notebooks eventually, but there is no word on when it will be available in retail/e-tail.

“Toshiba Memory is at the forefront of 3D flash memory development with 96-layer BiCS FLASH. SSDs pose the most formidable flash design challenge, and becoming the first company in the world to bring an SSD to market with the most advanced flash node is an achievement that is only possible due to our years of commitment to advancing our SSD technology", said Jeremy Werner, VP of SSD marketing and product planning for Toshiba Memory.

Last modified on 27 July 2018
Rate this item
(0 votes)
Tagged under
More in this category: « Samsung announces mass production of 2nd gen 16Gb LPDDR4X AMD has great quarter but margins low »
back to top