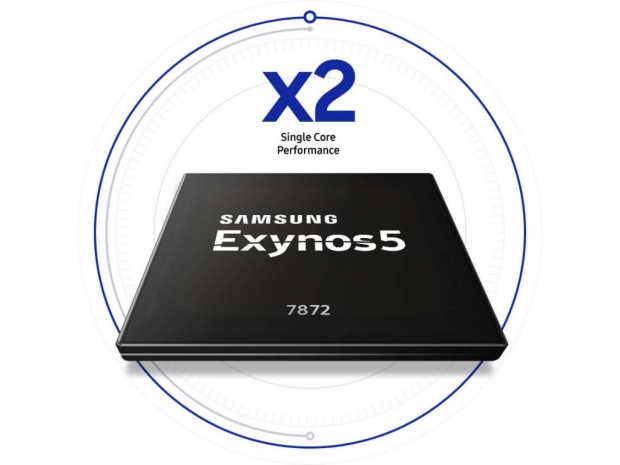 Despite its name, the Samsung Exynos 7872 SoC is a part of Samsung's Exynos 5 series chipsets, and will, at least according to Samsung, provide twice the single-core performance compared to its predecessor.

The Exynos 7872 is based on a hexa-core CPU design with two Cortex-A73 cores, clocked at 2.0GHz and used for high-performance tasks, and four Cortex-A53 cores, clocked at up to 1.6GHz and aimed at power efficiency. It also comes with a Mali-G71 GPU. The SoC supports LPDDR3 memory.

According to the specs provided by Samsung, it supports up to WUXGA (1920x1200) resolution displays, which should be enough for most mid-range smartphones. It also supports both rear and front 21.7-megapixel cameras and comes with an improved ISP (Image Signal Processor) and MFC (Multi-Format Codec). The improved ISP brings support for an iris camera sensor up to 8-megapixel and has an embedded hardware block for Smart WDR (Wide Dynamic Range).

One of the first smartphones that will come with Exynos 7872 SoC is the Meizu M6s, which has been announced today and there were some rumors that Samsung could use it on some of its mid-range smartphones as well.

Last modified on 18 January 2018
Rate this item
(0 votes)
Tagged under
More in this category: « Intel has more firmware problems Data centre computers could face reboot hell »
back to top