Qualcomm next server chip is Firetrail 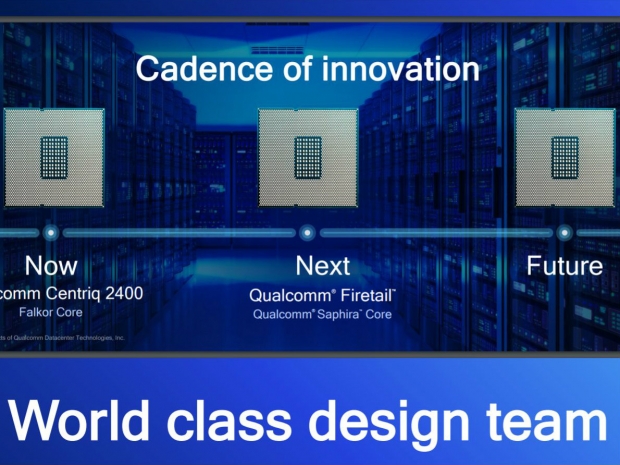 Qualcomm’s Anand Chandrasekher, senior vice president and general manager of Qualcomm Datacenter Technologies (QDT) has announced that the company is working on a follow up server processor.

This comes at the same event where Anand announced that Centriq is shipping to partners in volume for revenue. This is an important milestone for a project that took five years in the making. Qualcomm realized that owning both ends of the spectrum server and cloud infrastructure as well as the mobile, last mile connectivity will play out quite well as a strategy.

The new processor is codenamed Firetrail which is quite a promising codename and the Firetrail is based on ARM Sapphira cores. Fudzilla believes that the successor to Centriq 2400 series - the one codenamed Firetrail is actually a 7nm, but this is definitely not something that the company executives will comment on. Believe us, we tried. It might well be the second generation 10nm, but this all depends on Qualcomm’s time to market strategy and the product cycle related decisions.

It must be tough at the Intel server and cloud division right now as Qualcomm is the first company to ship the 10nm server chip to its customers. Intel has been stuck at 14nm for a while and there are no indications that a 10nm Intel server part will come soon.

Yes, Intel is not sleeping but it still hasn’t shipped a single 10nm core - never mind the Y series notebook chip, let alone a big and complex server chip. Intel’s CEO said that it will ship 10nm this year, but the year is slowly running out. Even if Intel shows a 10nm product, it doesn’t looks like it will have massive volume production either.

Bear in mind that the Qualcomm Centriq 2400 series has 48 cores while Intel’s best has 28 cores. AMD’s Epyc comes with 32 cores at its top configurations and both Intel and AMD chip sizes are significantly larger than Qualcomm's. Of course, these cores cannot be further apart from each other but it looks like Intel has a lot of catching up to do.

Qualcomm benefits from 10s of millions of Snapdragon 835 chips manufactured in 10nm. This is where the experience and process maturity with Samsung’s 10nm Fab comes from.

The fact that Qualcomm had some major players in the server market including HP Enterprise and Microsoft Azure, as well as many other smaller ones, the industry is responding well to the Centriq 2400 and Qualcomm is very vocal that it is here to stay. Intel goes after their modem business, Qualcomm goes after notebook and server/cloud businesses and confronts Intel. And the best part is that Qualcomm really has a good hand.

Last modified on 10 November 2017
Rate this item
(0 votes)
Tagged under
More in this category: « Qualcomm Centriq 2400 to challenge Intel Raja Koduri is running Intel's CPUs and GPUs »
back to top