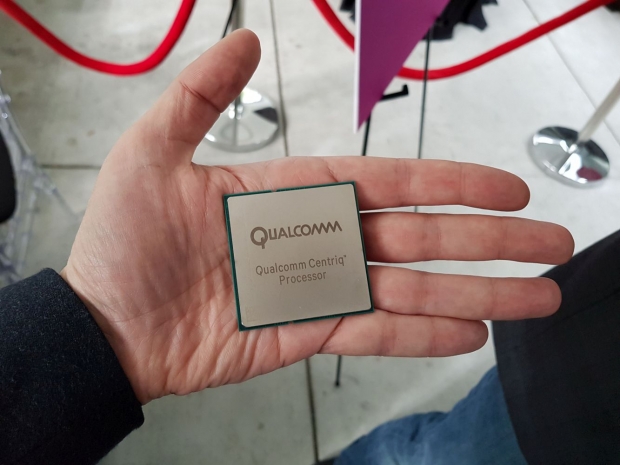 It has been a few years' journey but the Qualcomm Centriq 2400 series is finally shipping for revenue. This was confirmed by Anand Chandrasekher, senior vice president and general manager of Qualcomm Datacenter Technologies (QDT).

Instead of the usual approach using existing ARM cores, Qualcomm decided to develop a brand new Falcore core. This is not a simply tuned up Kryo core you saw in the Snapdragon, it is a completely new approach.

Dileep Bhandarkar Vice President, Technology at QDT and Anand confirmed that you need to do a custom design to address customers' needs and to get the power/performance/surface sweet spot and to compete against the competition.

Centriq 2400 is a 398 mm2 chip, with 18 plus billion transistors. Considering that this is a 48 core solution, this is not that bad. One big surprise is that despite so many cores, Qualcomm managed to get the clock speeds to 2.2GHz based frequency and 2.6 GHz peak frequency.

These 48 cores are single thread cores and they are ARM V8 compliant, fifth generation custom design cores. As we reported before, Qualcomm is using its Falcore cores that are AArch64 only. A server doesn’t really need 32 bit stuff anymore as you definitely need to address more than 4GB memory per CPU these days.

Don’t forget that Qualcomm has the IO (chipset) components built in, which also reduces the cost for cloud and server manufacturers and essentially the end customers. Qualcomm points out that this is a heavy integrated SoC with distributed architecture, and a single chip platform level solution that is Arm SBSA Level 3 compliant.

The chip supports six channels of DDR4 2667 MT/s memory and can support 768 GB memory with 128GB/s peak aggregated bandwidth. The best thing is that this is a 120W part.

Qualcomm points out that Centriq is built for cloud infrastructure and bear in mind that every photo you upload on the Facebook, every document in One Drive or Dropbox has to be somewhere. Some people like to point that there is no cloud, it is just a server attached to a fast network, but cloud sounds sexier.

When it comes to security the chip the chip has immutable root of trust, EL3 Trustzone and EL2 hypervisior. Since the chip is optimized for cloud, it has inline memory bandwidth compression and cache quality of service.

Overall it looks like the very skilful platform that could disrupt Intel’s server dominance and it won't be long until you will be able to integrated one in your connected cloud. Centriq is doing really well on power and performance level and having that performance and beating Intel on both power and performance at much lower TDP sounds like a great opportunity for a big change.

Last modified on 10 November 2017
Rate this item
(0 votes)
Tagged under
More in this category: « Google working out how to kill Intel's ME Qualcomm next server chip is Firetrail »
back to top