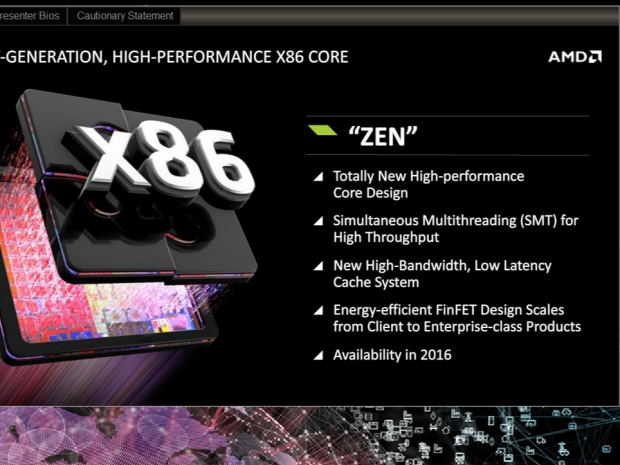 AMD has never really said that it will ship the Zen this year, the company was always cautious about giving  the exact date of the launch. We still believe that the desktop version of Zen will get shown late this year, December or at CES, in the first days of next year. Bench-life thinks that the actual shipping will happen in February.

The latest information mentions three different chipsets - the X370 high end chipset and the B350 and A320. The B probably stands for Business platform, a market that AMD is eager to re-enter to and of course the A320 should offer a more affordable Zen based computer.

AMD is counting a lot on the power of the do-it-yourself community as it plans to ship to them first but it doesn’t want to forget the big OEMs. The company has already publicly stated that large OEMs have got  samples of Zen processors.

These manufacturers are clearing their Zen based desktop PCs right now and we know for a fact that there has been some work on the server side too. AMD plans a big come back to the server market,  offering better price performance ratio to the current offering from Intel.

It looks like Zen is the chip that will help AMD come back to real profitability, but there are still some milestones that are set in the future. It all looks OK but the Q1 2017 for volume shipping was always a realistic scenario.

It is easier to ship the desktop part and then follow up with server, notebook and embedded, and this is something that Lisa Su the CEO confirmed at the Computex 2016 press conference and to Fudzilla after the event.

Motherboard manufacturers are working on the server and desktop motherboards and as AMD already confirmed you can expect the new desktop boards to use socket AM4, have a DDR4 memory controller and PCIe 3.0 among other new features.

Last modified on 14 September 2016
Rate this item
(14 votes)
Tagged under
More in this category: « CPU and GPU recycling could be just the thing Wall Street analyst says Intel chip better than Zen »
back to top