AMD has officially announced the successor to its Kaveri A-series APU line-up and the new chip, coming sometime in the first half of 2015, is codenamed Carrizo.

We already mentioned the Carrizo announcement yesterday, so regular readers may spot a bit of repetition, but we will go through all the newly released info nonetheless. AMD stressed that Carrizo supports Heterogeneous System Architecture (HAS), where the GPU and CPU share a unified memory and can combine serial work suitable for CPUs with parallel work suitable for GPUs. You get to benefit from unified memory, memory coherency as well as context switching between CPU and GPU data.

Mantle, DirectX 12 and Dual Graphics on a budget

The Carrizo APU shares a portion of its infrastructure with Carrizo-L, making it easier to get design wins. For example, it simply costs less to design and manufacture notebooks based on Carrizo or Carrizo-L APUs.

The new Excavator CPU core is optimised for low power notebooks or convertible form factors, which might imply that we will see some interesting designs powered by AMD in 2015. We wonder if we will get to see detachable designs. 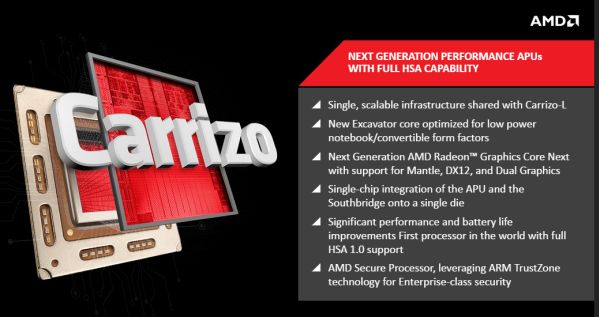 The next generation Radeon Graphics Core Next (GCN) iGPU has support for Mantle, DirectX 12 and Dual Graphics, so it will be attractive to mainstream gamers. The Carrizo APU has a single chip Southbridge, which is not a new approach as in the least few generations the Northbridge part of chipset migrated to the CPU in both Intel and AMD designs.

AMD expects significant performance and battery life improvements from its first HSA 1.0 processor and we have heard the same statements from John Byrne, SVP and GM of AMD Computing & Graphics Business Unit - Carrizo is the best and most efficient APU AMD ever designed.

AMD Secure Processor is now part of Carrizo APU and this component is based on ARM Trustzone and integrated onto the Southbridge. The good news is that you don’t need an extra chip that will make your platform a tad more expensive.

HSA can make a difference

Some of the potential HSA applications include Natural User Interface and support for gestures, voice recognition, biometric facial recognition a secure, fingerprint recognition, or even augmented reality where you can superimpose digital information as a virtual overlay. 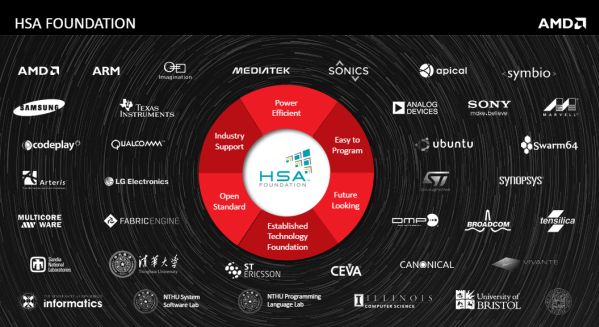 Audio video content management including searching, indexing, tagging and data mining of video and audio can also benefit from HSA approach as well as streaming media, new codecs, 3D, transcode and audio experience beyond HD. Virtual reality might be another technology that will become popular in the next few years when Oculus gets its act together.

AMD has a bunch of people interested in HSA with members including ARM, Imagination, Mediatek, Texas Instruments, Qualcomm, Broadcom and many others.

Rate this item
(0 votes)
Tagged under
More in this category: « Marvell launches octa-core 64-bit PXA1936 Qualcomm Snapdragon 810 reference hardware is out »
back to top