Compute and gaming, no word on T5i

Nvidia’s latest earnings call confirmed what industry watchers had suspected for quite some time. The company is changing its Tegra strategy to target new markets, but Nvidia CEO Jen-Hsun Huang insists the company will still pursue design wins in the consumer space.

In a recent interview with CNET, Huang confirmed the Tegra strategy has shifted, but he insists that Nvidia is still targeting smartphones and tablets. He argues that the market is evolving and that mobile technology is revolutionising all sorts of products, from cars to TVs.

The original Tegra was never meant to be a hugely successful product with high-volume design wins. The Tegra 2 and subsequent Tegra 3 were a bit different, as they made it to a number of high-volume devices, ranging from HTC phones to Google’s Nexus 7 tablet. However, neither of them had a particularly fast GPU.

That changed with the Tegra 4, which finally got a very competitive GPU. The Tegra K1 raised the bar even further, with 192 Kepler cores capable of delivering great visuals, but more importantly, great compute performance. The latter is not very relevant in mobile SoCs, but this is where Huang sees potential. 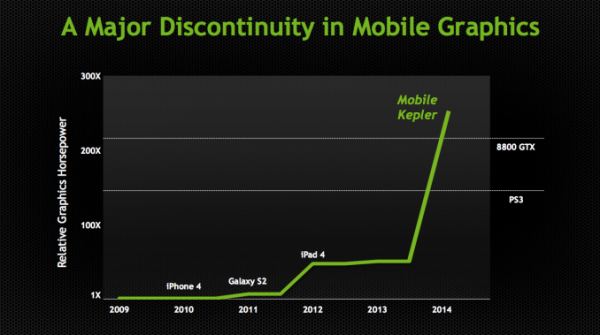 Huang pointed out that in some phones visual computing is important, but in others it is not. That is why Nvidia chose to focus on gaming, as it believes that is where it can add the most value. The next step is compute performance and niche products.

Huang believes Nvidia has what it takes to design high performance SoCs for niche products, namely gaming gear. He said Nvidia is a “fabulous partner” for anyone looking to build “the Porsche of tablets or phones.” Nvidia wants to highlight gaming performance and Huang believes Android gaming is going to be important down the road.

In addition, the company is looking at other niches such as smart cars.

Our takeaway is that Nvidia’s grand plan for Tegra in the consumer space is to turn it into the SoC equivalent of a PC gaming rig. Many consumers don’t need discrete graphics in their PC nowadays, so a couple of years down the road we might see a similar trend emerge in mobile devices. Some people will be willing to pay a premium to get a high-end GPU, while others will not.

Tegra 4i did not pan out

When asked why Tegra struggled in the smartphone market, Huang said Nvidia’s focus is still performance-oriented, while the market is commoditised and the key differentiator is the price. He pointed to MediaTek as an example, as the company is putting Qualcomm and other firms under a lot of pressure due to its aggressive pricing.

As for the Tegra 4i, Huang confirmed what we already knew, more or less. The product simply does not fit into Nvidia’s high-end SoC strategy.

When asked whether there will be a Tegra 5i, Huang said Nvidia does not talk about future products and that he has not talked about T5i.

Huang’s answers raise more questions. We can only speculate why the mainstream Tegra 4i was developed, as it does not fit into Nvidia’s strategy. Huang did point out that Nvidia learned a lot of lessons in the process, which may explain why it expended resources to develop this orphan of a chip.

Furthermore, there is still no word on a potential Tegra 5i and for the time being it appears that the T4i will not get a successor. Of course, the company has not confirmed or denied this, but we discussed it a while ago and concluded there is strong circumstantial evidence that Nvidia will not pursue the mainstream market anymore.