“With the iPad from Apple, Samsung’s Galaxy and other offerings from various tablet makers still selling well among consumers, a number of vendors are starting to join the race to supply tablet processors for the market,” said Gerry Xu, senior analyst for processor research at IHS.

Much of the growth is coming from cheap white-box tablets. They are usually powered by SoCs from Chinese suppliers such as Allwinner, Amlogic and Rockchip. Taiwanese chipmaker MediaTek is making some interesting moves, too, but the elephant in the room is Intel. 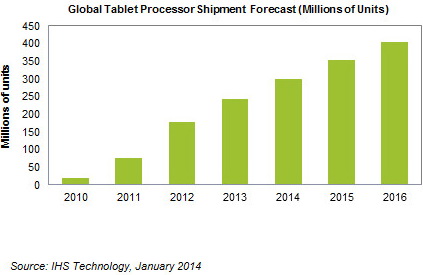 Chipzilla is planning to double tablet processor shipments to 40 million units this year. In order to make it all happen, it is throwing millions worth of sweeteners at OEMs willing to embrace Bay Trail-T products. Intel's aggressive prices and subsidies, which it does not like to call subsidies, but that's what they essentially are, could even lead some hardware partners to use Bay Trail parts in entry-level 7- to 8-inch tablets, IHS concludes.

This is bad news for Chinese IC outfits, as they rely on low-end white-box gear for much of their sales. They don't tend to offer high-end parts at all. MediaTek is somewhat different beast. It is much bigger and much more serious. It is planning to grow its market share with competitively priced A7 parts, including octa-cores, along with A7/15 big.LITTLE chips and quad-core A12 parts. It will also have a range of cheap LTE-enabled parts for affordable smartphones, which is not the case with its rivals across the Strait.

However, IHS believes Chinese chipmakers still have an astute handle on costs and the capability to produce turnkey chip solutions. They are more flexible than Intel and they are a batter match for cheap white-box tablets. Furthermore, most white-box outfits don't really have a relationship with Intel , as they don't tend to build PCs or servers, which means Intel has limited leverage.

Another problem Intel is likely to face in the Android and iOS space comes in the form of in-house SoCs. Samsung has them, LG is getting there and last year it was rumoured that Lenovo is looking at designing mobile SoCs of its own. Samsung and Apple aren't very likely to drop their own designs in favour of Intel's. However, plenty of other tablet makers do not, especially big PC players like Asus, Acer and possibly Lenovo, but even they can choose from a number of ARM-based parts from the likes of Qualcomm and Nvidia.