Richland desktop reviews are in

As expected, AMD has now officially launched its A-series Elite dekstop APUs, previously known under the Richland codename. To be available in dual- and quad-core versions, the Richland APUs will be sold as the Ax-6xxx series differentiating it from previously available Ax-5xxx Trinity APU series.

The new Richland APUs can be considered as a refined Trinity rather than a completely new APU and the nearly identical specifications pretty much confirm it. AMD simply refined the existing architecture, added an improved memory support and squeezed in a bit higher clocks. Despite being named the HD 8000 series, the graphics part of the Richland is pretty much the same as on Trinity, despite slightly higher clocks.

We already wrote everything that is to write about these APUs in our previous articles back when they were listed/available and you can check the precise details in the table below.

Although AMD claims that it managed to squeeze out up to 9% more multi-threading performance over the previous generation, up to 15% increase in graphics performance over Trinity, real-world actually show that Richland ends up just a bit faster than Trinity in most scenarios.

The good side of the story is that the A10-6700 is pretty much on par with the A10-5800K Trinity flagship, but does it at 65W TDP instead of the 100W one. It also has the pretty much same launch price as the Trinity part and also fits the same socket. The A10-6800K Richland flagship does have slightly higher performance results but also retains the same 100W TDP.

In any case, Richland sounds like a decent Trinity refresh and nothing more. In case you are looking for some real performance and feature set improvements, you'll have to wait for Kaveri A-series APUs, schedueld for the end of this year and based on Steamroller CPU, Graphics Core Next GPU and HSA application support. 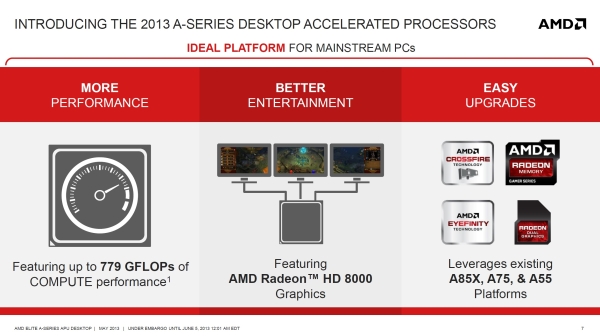 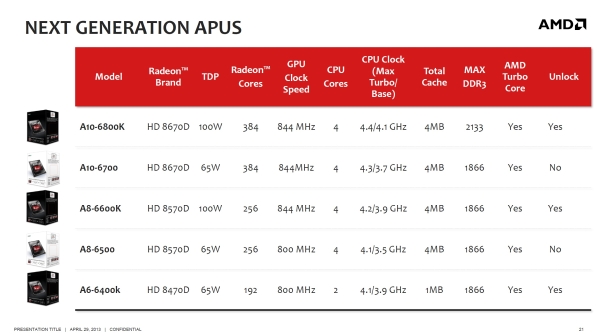 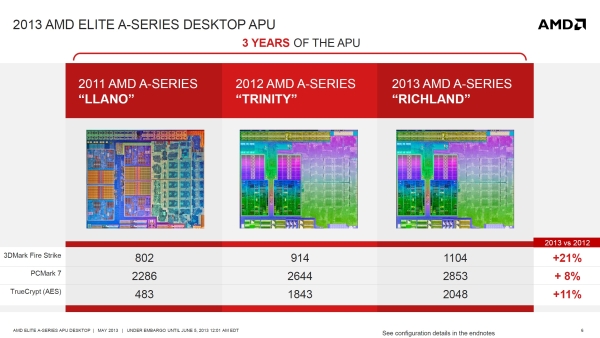