Leaves Snapdragon 600 in the dust, faster web then iPhone 5


Our sources were telling us that Tegra 4 is fast, but we didn’t expect it to do so well in early benchmarks against the competition. Nvidia has let the tech press put a Tegra 4 based tablet through its paces and most were impressed with what they saw.

Furthermore Tegra 4 reference tablet scores 506 ms in Sunspider 0.9.1 web test. In reference Tegra 3 on HTC One X+ scores around 1220, iPhone 5 that we just tested scores 980ms, while Tegra 3 based HTC One X scores 1705ms. Qualcomm’s Snapdragon 600 in HTC One scores 1124 ms which is just slightly better than Tegra 3 phone on 1.7GHz. Of course, in this test lower scores are better, as Sun tries to measure the load times of websites.

In Quadrant Tegra 4 scores 16449, while HTC One X with Tegra 3 1.5GHz scores 4998. HTX One X with Tegra 3 at 1.7GHz scores 5876 (freshly tested seconds ago).HTC One with Snapdragon 600 scores 11746 again significantly lower than Tegra 4.
We got some further results that were scored by Nvidia, but many journalists had access to a Tegra 4 reference tablet and did get comparable scores to the ones in the table below.

Now we have to see how Tegra 4 does against Snapdragon 800 and Samsung’s Exynos 5 Octa. 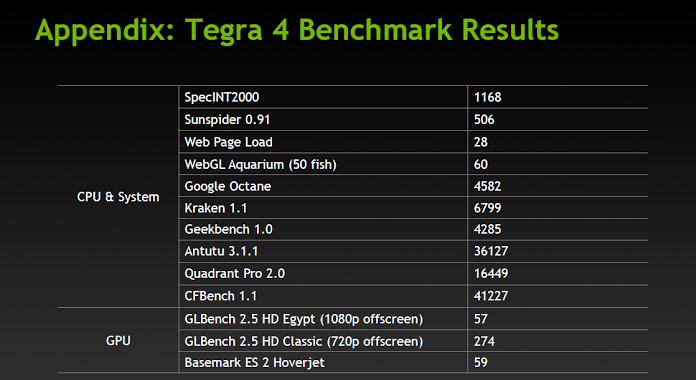 Rate this item
(0 votes)
Tagged under
More in this category: « Intel officially announces its Clover Trail+ Atoms Qualcomm not afraid of Tegra 4 »
back to top