Detailed back in November last year, Samsung's new eight-core Exynos is now official. Samsung announced the new mobile SoC based on the big.LITTLE configuration during its second-day keynote at CES.

Based on two quad-core clusters stitched together, the 28nm Samsung Exynos 5 Octa is not your standard eight-core chip as it either uses more powerful 1.8GHz clocked Cortex-A15 or more power effective 1.2GHz clocked Cortex-A7 cluster for standard workloads. Samsung noted that it has managed to cut down the power consumption by up to 70 percent when compared to the Exynos 5 Dual and since it comes with four Cortex-A15 (as opposed to two in the Exynos 5 Dual), it provides much higher CPU performance and twice the 3D performance of any currently available mobile processor, including the Exynos 4 Quad.

As you remember, the Exynos 5 Dual was doing quite an impressive job in the Google Nexus 10 tablet and Exynos 4 Quad was more than enough for the Galaxy Note II and the Galaxy S III.

Unfortunately, Samsung did not mention any time frame or actual devices that could feature the new Exynos 5 Octa but we guess that MWC 2013 in February might bring some new details.

You can check out more over at Engadget.com. 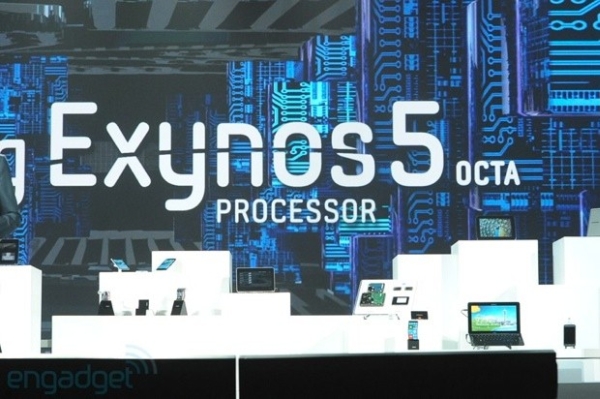