AMD has revealed its answer to the tablet conundrum in the form of Z-series APUs and the 40nm chip that we used to call Hondo is finally out. Its official name from now on is Z-60 and it is a 1GHz dual-core APU with 4.5W TDP and 80 Radeon cores.

Of course, 1GHz is its maximum clock and the chip itself can work at lower speeds to save power. The chip comes with 1MB of L2 cache and USB 3.0 support as a refreshing change in this market. The Z-60 supports up to 1080p resolution screens. Based on AMD internal testing Z-60 should be enough for up to 10 hours in Windows presentation mode, 8 hours of web browsing and up to 6 hours of video playback. The company also claims that Hondo should be able to last almost two weeks in S3 mode on a standard battery. Hondo Z-60 needs 0.75W in idle mode 1.12W in web browsing and 1.57W in HD video playback, while the FCH needs some 0.6W on average. The rest of the system needs 1.58W in idle, 2.17W in web mode and 2.54W in HD video playback mode. 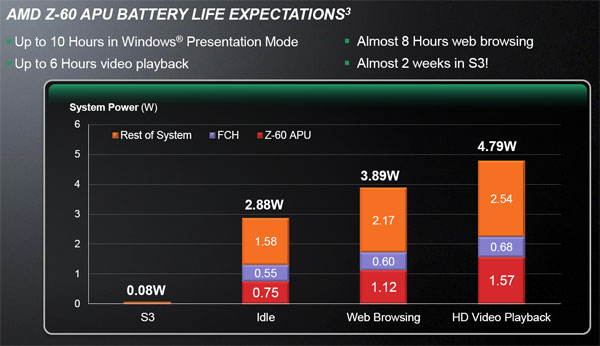 A Hondo-based Z-60 tablet, with Windows 8 in S3 only needs 0.08W for the whole thing, but it doesn’t support the connected stand by updates. Windows 8 tablets and convertibles based on Hondo Z-60 should launch with Windows 8, so on or after October 26th. Z-60 should be able to resume from sleep within 2 seconds and completely boot to Windows 8 in 25 seconds.

AMD has a few design wins but it didn’t want to talk about them, letting its partners introducing the devices for them and sub-10mm designs are possible. We saw a mock up 10-inch device that was really thin and AMD has already confirmed that this is roughly how the Windows 8 tablets and convertible that look like the Asus Transformer will look like. 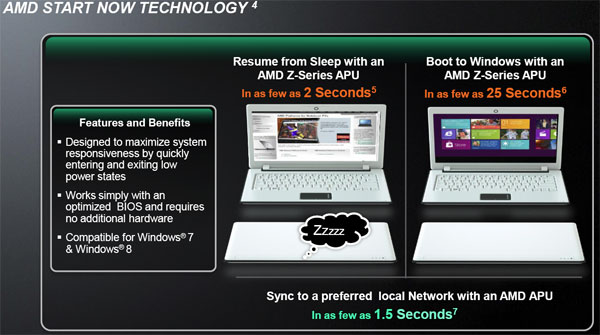 AMD biggest bet is that some PC games will work on its tablet under Windows 8 non-RT as well as many applications including Office. This is definitely going to be a good argument for getting a X86 tablet.

Let’s hope that AMD can sway partners in its direction when it comes to Windows 8 tablets launching in 2012 and 2013.
Rate this item
(0 votes)
Tagged under
More in this category: « Core i7 2700K to get EOL after first birthday Ivy Bridge Celerons in Q1 2013 »
back to top