The Pentium G2120 has brought Ivy Bridge to the sub-$90 market and Intel plans to further accelerate its sub-$90 Pentium plans. The Pentium G2120 is a dual-core with two threads at 3.1GHz and 3MB of cache, with a maximum TDP of 55W and there will be at least four more Ivy Bridge Pentiums.

In Q1 2013 Intel plans G2130, a dual-core, two-thread Pentium with 3.2GHz clock that will replace the Pentium G2120 in top of the Legacy L3 market. The G2120 drops down to L2 market replacing the 3.1GHz clocked G870 Sandy Bridge Pentium. In the meantime Pentium G2020 shows up at 2.9GHz as a replacement for Pentium G645, a Sandy Bridge based Pentium in the L1 Legacy market.

As you can see the clock to clock Sandy Bridge Pentium and Ivy Bridge Pentiums are almost the same but in reality Intel Ivy Bridge parts will bring Direct X11 support as well as faster per-clock performance and significantly faster graphics to the same price point.

Intel feels rather confident in its 1H 2013 roadmap and we are seeing only the usual adjustments and slight clock increases to its current roadmap. 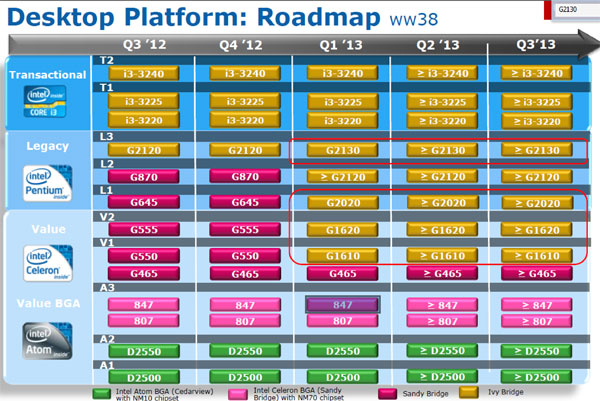 Rate this item
(0 votes)
Tagged under
More in this category: « AMD Richland uses FM2 socket Core i7 2700K to get EOL after first birthday »
back to top