IDF 2012: Much better performance per watt


Intel did mention that with Haswell, its fourth generation Core architecture, you can expect more performance within the same thermal envelope. They showed a demo of a Haswell versus Ivy Bridge Ultrabook running Unigine at the same performance.

It turns out that Haswell 4th generation Core needs 7.6W for the same task where Ivy Bridge Core-i 3000 series needed a flat 17W. This is a huge difference but you should have in mind that at the end of the day Intel will offer the same 17W parts with Haswell but they will bring a significant performance at the same 17W.

This also means that the graphics part got significantly better. Intel didn’t talk about it on the record but our sources for a while are talking that you can expect some 10 percent performance increase with Haswell vs. Ivy Bridge in processor performance.

This is definitely good news for all consumers willing to wait for Haswell to ship in 2013. 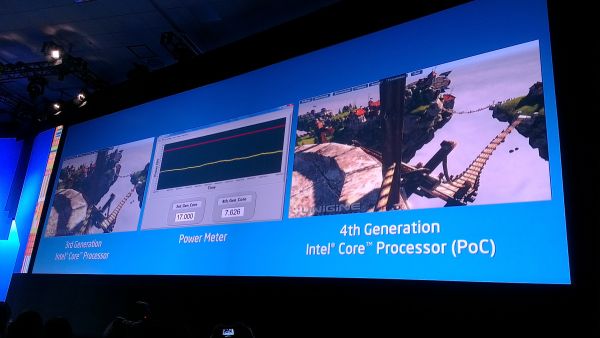 Last modified on 11 September 2012
Rate this item
(0 votes)
Tagged under
More in this category: « No precise date for Haswell Intel 14 nm Broadwell chip works »
back to top