Updated: AMD says no announcement was made

AMD has announced that Apple is planning to embrace its new Fusion platform for its future desktop and notebook systems.

During an AMD Financial Analyst Day presentation, Senior VP and Chief Sales Officer Emilio Ghilardi spilled the beans on this quite interesting development. In a series of Fusion APU slides, Ghilardi also showed slide number 7, which clearly named Apple as one of the many Fusion partners. Ghilardi did not comment the slides, saying merely: "I'll flash through them very quickly."

He mentioned AMD's cooperation with Fusion partners, saying that a bunch of new Fusion products never seen before would be introduced by the end of the year. Yesterday AMD announced that Brazos shipments have already started, so it's quite possible that Apple engineers are already sipping their lattes and toying about with Ontario and Zacate APUs somewhere in Cupertino. Apple already uses AMD GPUs in some of its products, but it has never used AMD processors so it is somewhat surprising to see Apple mentioned in the APU context. Considering AMD's habit of throwing the Fusion brand around, it could also be merely referring to Radeons.

If true, this could prove to be a major coup for AMD, as getting Apple on board the Fusion bandwagon will undoubtedly drive other vendors to consider the new platform as well. Apple on the other hand would also stand to benefit from Fusion's graphics prowess. If there is one thing Apple users appreciate, it's eye candy. Speaking of which, Apple and Fusion logos look rather nice together.

Update: Our old friend AMD Senior PR Manager Chris Hook told us that Apple is currently just an AMD hardware partner, but not a Fusion customer. "Neither Apple nor AMD have made any announcements regarding Fusion in any future Apple product," Hook said. We can only speculate whether the companies have any plans for coopearation in the APU segment at this point. A couple of months ago it was rumoured that Apple will use Fusion parts in its new Apple TV lineup and believe AMD's superior graphics and OpenCL support could be too appealing for Apple to ignore. 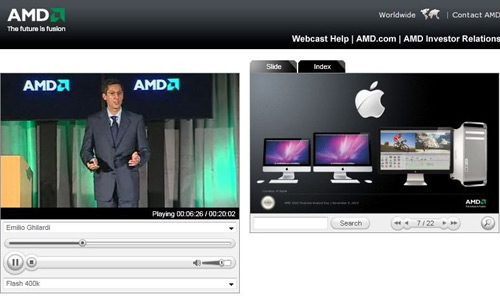 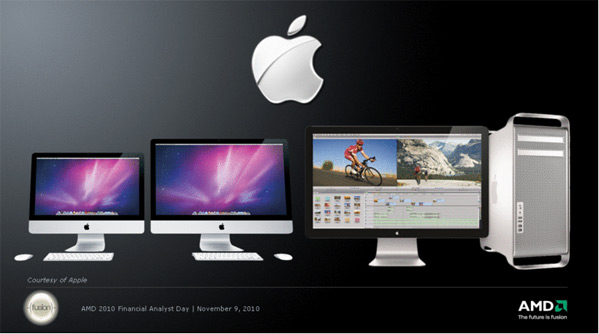 Last modified on 11 November 2010
Rate this item
(23 votes)
Tagged under
More in this category: « AMD sheds more light on Brazos Enter the AMD Komodo 8-core Fusion »
back to top